I'm pleased to welcome Simone Sinna back to my blog! She was my very first guest on Sinful Sunday. Now she's back to share some thoughts about keeping your relationships strong. Enjoy!

My mother: “oh my god why would you want to write that sort of thing?”

My daughter: “Oh my god it’s alright for other people to write that but you’re my mother!”

My son: silence with bemused looks at the posters I have on my office wall of the book covers featuring topless men. He hastens any female friends past the room very quickly…

My husband…too busy appearing at ladies luncheons and book clubs…mmm.

So getting back to true confessions. Maybe part of a one anyway.

I wrote the Stephanie Beauman series as a straight MF but many of the readers even though giving positive reviews thought she was a tad promiscuous. I guess given the time frame this was true, but I was doing research for a nonfiction book in this area, and Stephanie given she gets married and HEA in Exclusive (and would have then of course been faithful!) probably ended up about average over the course of three books.

The reality is however, that affairs are very common. Marriages break up all the time and under 50 at least this usually involves “someone” else. I am on my second marriage, a very happy 23 years, but the shorter first marriage was considerably less happy. My true confession then is about one of the many lessons I learnt from this, as well as from as a therapist.
1.      Keep communication alive.
2.      If you’re thinking of having an affair- you will!
3.      You rarely really know why you are doing things when in the midst- it’s self justification.
4.      The most astonishing one for me, as I have always thought honesty is the best policy- well maybe not. In the words of William Blake: “A truth told with bad intent is worse than any lie I could invent.” It probably isn’t told with bad intent, just selfish intent which ends up being the same.
5.      If you do err but don’t want to end your relationship and hurt someone you love, maybe your price is to live with the guilt. You can either lie (Bettina Ardnt recommends this in her book the Sex Diaries) and sort yourself out, probably in therapy – or tell the truth, and leave your marriage there and then. It might be the worst of both options, to tell the truth and stay. Or at least if your partner is not the type to forgive. Men murder women over this sort of thing!
As I hate lying, and can’t keep a secret guess my husband is stuck with me! But that’s where the wonderful world of fantasy comes into play…now back to the next MFM BDSM book I’ve started writing… 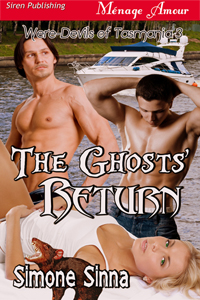 Lena Magnussen is unhappily lost in a romance novel on a charter boat when fate intervenes in the form of two hot men, Lincoln and Kael Tremain. Only problem is she is a ghost vampire and they are the enemy, were-devils.

The men know who she is and presume she senses them, but the curse, after two generations, is about to turn against the ghosts. They find they are racing against time, battling age-old hatreds between the groups, and trying to make sense of Lena’s illness—the old curse or the Hendra virus Lincoln is working on, which could be the one his father caused to mutate in order to exact revenge.

In a gripping climax, the ghosts return to Tasmania to rescue Lena and her cousin Gabriella from the were-devils they love, and in doing so threaten to finally wipe out the remaining were-devils and their home Tarrabah.