Here to unload a few things that have been weighing on her mind is the lascivious Lara Valentine! She's a Siren Exclusive author who has recently joined the ranks of full-time writers (I'm so jealous!) and her latest book, His Submissive Jewel was released this past Friday. It's part of The Martinis and Chocolate Book Club series, and I don't know about you, but that's a club I'd LOVE to join! But I'm rambling now, so I'll let Lara take over.

Thanks for having me as a guest today, Michelle!

Ooooo, True Confessions!  It’s sounds a little naughty and kind of daring, too.  I thought I’d share a few of mine here today.  They say confession is good for the soul!

·         My mother never had “the talk” with me.  My early sex education came from sneaking reads from her Cosmo magazine, and her historical romances.  You could say my horizons were widened after I read “Sweet Savage Love” by the inimitable Rosemary Rogers.   I think I was eleven or twelve at the time.  It was a few years later that I went back and read the “clean” parts of those books.   I also read Cosmo until Helen Gurley Brown retired as editor in 1997.  Oh, and I’m pretty sure looking back that Mom knew I was sneaking her books and magazines.  I think she wanted to be open and up front about sex but her upbringing hadn’t really shown her how.
·
When I was first dating my husband, I didn’t realize I was dating my husband.  Sigh.  Please, let me explain.  When I met my husband, we were both dating other people.  We were friends and spent a lot of time with one another along with some other friends.  As the months passed, we both ended our relationships and started spending more time together.  Eventually, we started spending time together – just the two of us.  Apparently, these were dates.  My husband knew.  My friends knew.  After a few weeks, he let me in on the secret.  It was a lovely surprise and we’ve been together since.  It just speaks to the fact that my head is in the clouds most of the time.  I would have been a good cavewoman.  The caveman could hit me over the head and drag me to his cave.  That’s when I would know he liked me!
·
Until recently, I had a very conservative day job at a financial firm.  I do write under a pen name and one of the reasons was to keep my writing a secret from my day job.   Many of my co-workers knew I was a writer and were constantly bugging me to reveal my nom de plume.  Since I was not sure of their reaction, I held off until my last day.  On that day, I did a True Confession, and revealed all.  I was pleasantly surprised by the reaction and may even have picked up a few new readers!

Whew!  I do feel better now getting all that out.  Thanks for letting me confess, Michelle.  I hope everyone has a terrific True Confession Tuesday!  I hope you’ll check out my latest release – His Submissive Jewel from Siren-Bookstrand. If you want to stalk me, stop by my website, follow me on Twitter, or check out my author page on Bookstrand. 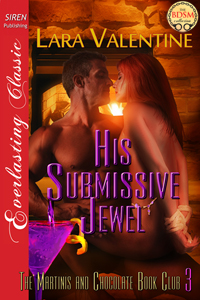