The House of Dracul Series by J. Annas Walker

I'm doing something a little different today. I've got a spotlight for my friend and fellow Sirenista, J. Annas Walker, whose latest book, Scion's Avalon was released on May 30. It's the second book in her House of Dracul series about the granddaughter of Vlad the Impaler.

I really enjoyed reading these books, so I'm including reviews for both! 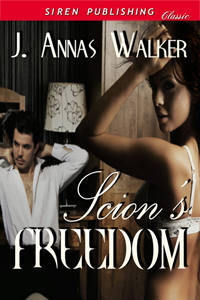 As the Scion of the House of Dracul, vampire princess Cassy Daniels just wants a simple, royal-free life in New Atlanta. It’s been thirty years since The Fall, when the world’s economy collapsed. Although supernatural creatures are helping to rebuild society, Cassy remains in hiding to avoid an arranged marriage.
When her journalist bodyguard and best friend, Erica, is assassinated, she flees for her life with the help of Detective David Ashe. He’s reluctant at first. She used him a few weeks prior. However, she’s the sole survivor of a serial killing and his only lead. Something about David is magnetic and Cassy falls for him hard.
Can they find Erica’s killer before he finds them? Can David forgive her past enough to love her? Can the Council of Crones, a coven of elder witches, provide more insight as to who is hunting Cassy and why? Will she survive the assassination attempts and still hold on to the man she loves?

One of my favourite authors is Kim Harrison, and right away, Scion's Freedom reminded me a bit of her Hollows series. It takes place after a catastrophic world event destroys a large portion of the human population and allows supernaturals to finally reveal themselves. This book has a lot of the features I like in my books: a strong heroine, vampires, romance, hot sex, and intrigue.

I enjoyed this book a lot! It's not a long read, but it seemed even shorter because the author kept the story interesting enough to keep me going, and when I reached the end, I was like, "It's over? Already?" I'm pretty sure it was Jane Austen who said, "If a book is well written, I always find it too short." I couldn't agree more! And this is usually my number one complaint with books I've enjoyed. 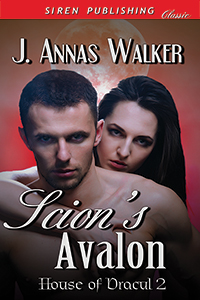 Three years have passed since vampire princess Cassy Daniels, Scion of the House of Dracul, gave up her title to turn and marry David Ashe. Together, they live in exile with the Council of Crones, a group of elder witches. Isolated from the world, they found bliss. However, vampire politics soon intrude. Born vampire women are being kidnapped, and Cassy’s next on the list.

After a failed attempt to take Cassy from the Council of Crones estate, magical portals lead back to the missing women. Cassy and David are tasked with bringing them home. David is sent after Elisabeta, Cassy’s sister-in-law, who is still on Earth. Cassy, however, has what it takes to enter the elf-kingdom of Avalon and retrieve the other three vampires.

Can Cassy and David hold on to their bliss, or will Avalon’s magic lure her from home?

I love being able to follow characters through different stories in a series. In my own books, I make each book about a new set of main characters, but J. Annas Walker's Scion's Avalon follows Cassy and David, the main characters from her first book in the House of Dracul series.

It was great to catch up on what Cassy and David are doing now, three years after their first story. Now, there's a new mystery for them to face. I love the world the author has created, and the plot is just as strong in this second book.

The only reason I'm not going to give this book five stars, is the editing. I'm an author, and I get that reading your own work you see what you think you wrote, and often miss errors. I cringe when I look back on my own books, because I am still finding errors in those. Even after being seen by myself, beta readers, and editors, mistakes can slip through. In Scion's Avalon I noticed enough of these to make it a bit distracting, but because the story was so strong, I was able to stay immersed. I recommend checking out this latest book by J. Annas Walker!

Click on the book covers to visit J. Annas Walker on Bookstrand, or check out her website and blog!
http://jannaswalker.blogspot.com

The Men of Treasure Cove cordially invite you to a …
Treasure Hunt
In anticipation of the newest Men of Treasure Cove book, “Gabriel’s Heart” by Rebecca Joyce, over the next two weeks, The Men of Treasure Cove have hidden random questions and clues over a series of Blogs and WebPages. To win, all you need to do is gather the clues to find the Treasure the men have hidden.
*THE RULES*
1. Read up on all the Treasure Cove books. (You will be unable to answer the questions if you haven’t!)
2. Follow the clues and the links provided to the next day’s clue, and you are off!
3. When all the clues are gathered, and you have answered them correctly, email me your answers before 8pm, EST on JUNE 8th, to: morningcoffeedrinker@yahoo.com. The first to correctly answer all the questions, wins the GRAND PRIZE!
3…2…1… here we go!
Clue #11: In “The Perfect Plan”, who gives Jacks the black-eye after the meeting at Macie’s Diner?
To find the answer read, “The Perfect Plan” book four of The Men of Treasure Cove! 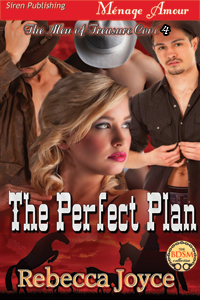 Orin, Davis, and Jacks McDaniel are the party boys of Treasure Cove. All are single, good looking, and refuse to marry, opening their house for fun, folly, and lots of kinky sex. So when they wake the next morning with wedding rings on their fingers, they are stunned.

Lillian Campbell is just trying to live her life as quietly as possible. Hidden away in Celestial, not more than four hours away from her hometown of Silver Springs, she has managed to stay under the radar. That is until she wakes up to find herself married to three hot-looking cowboys.

As the mystery of the night before begins to unfold, the brothers find themselves between a rock and a hard place. To keep everything they hold dear, they must formulate a plan to hide their wife, keep their marriage a secret, and not lose their hearts in the process. Because even the best-laid plans have a degree of difficulty.

Check back tomorrow at Rebecca Joyce’s Blog for CLUE#12…and GOOD LUCK!
Posted by Unknown at 00:00 No comments: