Would you like a little wine with your hot men? (Michelle: Yes, please!!!)

Alcohol is a gray area in the sin department. Some religions preach it’s bad. I have some family in the south and take delight in drinking in front of themJ

Being raised Catholic, wine was never taboo. Drinking is perfectly fine! A local summer fair at a park. Town law prohibits the sale of alcohol on town land…so the big Catholic Church adjacent to the park puts the Beer Garden right in their parking lot! The Pope and I disagree on a lot of stuff, but wine isn’t one of them!

There are many religions that say Jesus turned water into grape juice (really?)…not wine. I prefer the wine version! 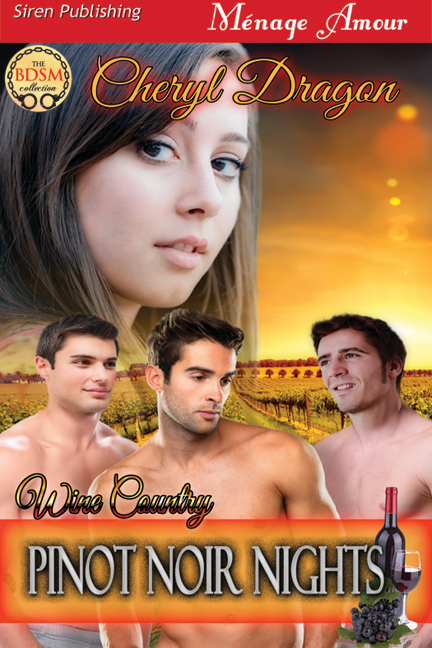 Blurb:
Professional wine critic Sonia Rowan is thrilled to attend a private tasting at Farabella Vineyards. Lovers Carter Farabella, Jace Porter, and Warren Bonham run the winery. She’s known them for years, but being alone changes everything. They’ve been waiting for the right time and want to uncover her submissive sexual side! She’s trying to shake a pushy ex who is also in the wine business.

The very in-control woman reveals her eager-to-please side. Learning their likes, she teases and falls for each of them. She’s never had so many men demanding her attention, but staying too long could ruin her career. Sonia doesn’t want to leave, but her objectivity is critical to her job. When her ex finds out that Sonia extended her stay at Farabella, he’s out to make serious trouble for the winery and destroy her in the process.

Carter’s hand was on the table as were packets of condoms and lube. She looked him in the eye. As much as she’d tried to be a proper sub that never made eye contact or took action without permission, she wasn’t that good. She’d never be truly obedient, but being punished was part of the allure.

Sonia stepped up on the chair and Warren helped her onto the table from there. Naked on a huge wooden table that belonged in a museum, she shivered for attention. Carter kissed her hip and rubbed her breasts. “You just say when you’ve had enough.”

She kissed his mouth. “I doubt that’ll happen.”

Carter reached behind her head and pulled the clip from her hair. That small act made her feel totally exposed. Her long, straight hair was the one feature she hated. It did nothing, so she kept it long and pulled it up in a simple twist. Yet Carter happily ran his fingers through it. She shifted to her hands and knees and reached for his fly. His member was hard under the charcoal gray dress pants.

He groaned and dropped kisses in her hair. Then masculine hands were all over her ass and breasts. She spread her legs to leave no doubt of her needs. When Carter pulled from her and removed his clothing, she turned on her back and looked up at the two naked men on the table with her. Both Warren and Jace were hard.

“What do you want me to do?” she asked sweetly.

“You are very different this way.” Carter spread her legs and held them there until Warren kissed her thighs. Finally he buried his face in her pussy.

Moaning, she lifted to him as he licked her folds and pressed a finger just inside of her. She trembled after a few seconds under his touch. Warren knew how to eat a woman out. He teased and took his time, playing lightly on her clit. When she opened her eyes, Carter’s hard cock was to her left while Jace was on her right.

Sucking Carter first, she looked up at his gorgeous hard body. She teased the black hair on his chest and trailed her fingers down over his defined abs to his cock and cupped his balls as she sucked the tip of his shaft.

Jace lacked patience and sucked her breasts while he waited. Then Warren’s tongue worked her clit harder and she moaned on Carter’s cock. Somehow all the attention felt natural.

“Definitely. Warren just needs to make sure you’re warmed up.” Carter thrust in and out of her mouth.

“She loves it. Three might not be enough.” Jace teased.

Groaning, she wondered how he’d controlled himself but tongued the tip of his erection anyway. Jace guided one of her hands around the base of his cock as he started using teeth on her breast. He nipped on the underside, and she arched her back. Men loved her tits, yet she couldn’t believe three men were enjoying her body at once. Jace held her flesh firmly and twisted her nipples.

She stroked his cock while sucking Carter’s faster and faster. She needed to hear them moan and feel them come for her. Warren’s skilled tongue had her on the edge of screaming in the huge dining room, but she didn’t want to go first. Rubbing behind Carter’s sac, she nuzzled the head of his cock until he cursed. The Dom came first and she smiled.

“You love it. You’re made for this.” Warren rubbed her clit. “Admit it.”

“I love it! Fuck me, please!” Her body bowed as the orgasm took hold.

Warren never let up fucking her cunt or working her sensitive nub. She screamed and lifted her hips to him as the sweet agony raged through her entire body. Carter held her shoulders down and Jace kept right on playing with her breasts even as she came down from the high.

“You’re responsive. I like that.” Carter kissed her cheek. “I think you deserve some cock now, don’t you?”

She nodded and licked her lips.

“Jace has never fucked a girl before. Be nice and ride him hard.” Carter flicked her nipple.

Moaning, she couldn’t believe it. Then she looked Jace in the eye and realized it was true. Her pussy tightened at the idea of having him first. No doubt he’d fucked plenty of men, but it didn’t lessen how much it turned her on to be his first woman.

She rolled onto her stomach and needed a little reassurance. “Am I doing okay so far?”

Carter smacked her ass, which she’d left conveniently hiked up in the air. The sting and ripple went deep into her and made her believe in this moment that one man would never be enough. She was meant for more. Grabbing protection, she crawled to Jace.