Today I'm featuring the marvelous Marie Jermy on my blog! She's been a bit under the weather so I'm posting on her behalf - any major snafus are all mine.

Of course, Marie's biggest 'sin' is writing naughty stories, but thankfully, we're willing to forgive her because we all love to read them! Her latest release, Undercover Desires has garnered a SEXTREME rating from SirenBookstrand. According to their system, this means: "Extreme sex scenes; hard core; many instances of unconventional sex; no holds barred in sexual language; not for the faint-hearted; definitely will offend most readers"

Whew! If that's not something sinful, I don't know what is! I'm just glad I'm not most readers!

You should check out the excerpts to see what I'm talking about! They're on the Bookstrand site and you can find them by clicking here. This is also where you can find out about some of Marie's other naughty work. And with any luck, it leaves you with lots of sinful thoughts! 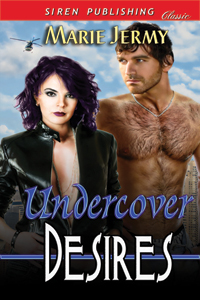 Opposites attract…
Who are you? What are you? are the questions Georgiana Lorenz, a writer for Rock Mania magazine asked herself when “Ferret,” an alcoholic junkie and her informant of three months, started behaving strangely. Gone was the filthy, smelly, always-wanting-to-get-inside-her-pants scumbag, and in his place was… Well, okay, he was still filthy and smelly, but his lightning reflexes and the muscular body under the tatty clothing suggested he was a different man altogether.
Indeed he is.
FBI Special Agent Reed Sullivan has been assigned one dirty mission—to take the place of the recently departed Ferret in order to bring Ahmed Aziz Armin, a suspected gun smuggler and supporter of terrorism, to justice. Falling in love plays no part in his plans of putting Armin behind bars. One meeting with Georgiana Lorenz, however, has Reed losing his heart to the purple-haired, pierced, and tattooed nightmare, and his cover and his plans are blown higher than an acid trip.