Today's guest is the hot, sexy, and talented, Sage Marlowe with some thoughts on the benefits of sin! Because let's face it, being naughty can be oh, so nice!

Michelle’s Sinful Sundays are a new feature and I’m thrilled to be one of the first guests. Being the first, or one of the firsts, has its merits as there’s not much comparison, but it’s also hard because the range of possibilities is wider. Anyway, the theme is sin. Sigh. I meant to write something thoughtful, witty and funny on the topic but, when I started my research, I realised it would have to be all about the religious background because, let's face it, sin is a religious concept. Unfortunately getting Sage started on any topic that involves religion and especially on what is considered bad or wrong in the biblical sense  is never a good thing, so instead of risking to scare you off with a glorious rant, I'd rather entertain you with the good aspects of sin.

"What, there are good aspects to sin?" I hear you ask. Well, yes. The aspects where the sinning consists of doing something that is enjoyable and not hurtful to anyone, but which is commonly considered naughty or bad, like, for instance, stealing. Sex without the purpose of reproduction. Sex before marriage. Homosexuality. Yep, all considered sins, but fortunately at least a part of our society has moved beyond that.

All those elements are included in my new series, Romeo & Julian about an FBI agent and the cat burglar he’s chasing, so I hope that the following saucy excerpt from A Thief on Christmas Eve (Romeo & Julian 1) won’t evoke negative feelings. It might make you feel sinfully naughty, but hey, that’s good, isn’t it? 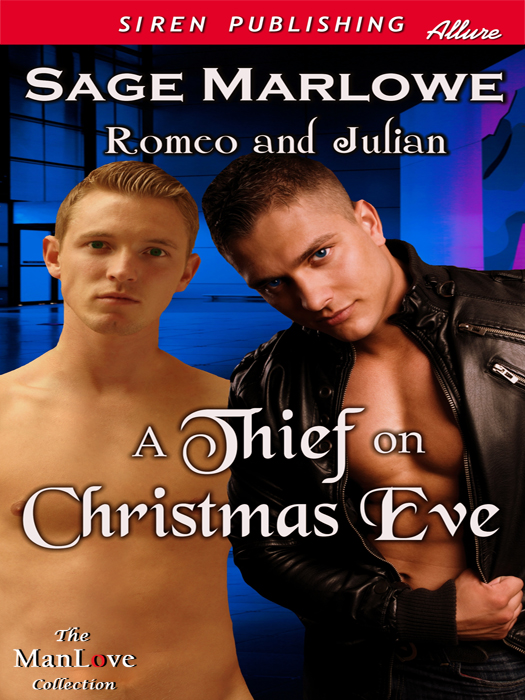 Blurb:
When it comes to slick art thief Romeo, FBI agent Julian Harris has to realize that sometimes, to catch a thief is just the beginning.

When FBI special agent Julian Harris finally corners art thief and cat-burglar Romeo he's planning to put the man first in handcuffs and then behind bars. Instead, he finds himself first trapped in a house in the mountains by a blizzard and then captivated by Romeo's irresistible charm. One thing leads to another and after a night spent together, Julian wakes up alone with his pride bruised and his heart stolen.

Almost a year later, a twist of fate brings them back together and their mutual attraction sparks up again instantly but events take on a dynamic that could have at least one of them wind up dead. Blackmailed into a precarious break-in, Romeo has to choose between Julian's life and his own safety while all the time, there are two questions on Julian's mind: Who is this slick and sexy thief really and where does his true loyalty lie?

Adult excerpt (R)
Julian couldn’t remember ever having felt so nervous walking into a bedroom as he did just now, following Romeo. It wasn’t just anticipation and the sizzle of arousal he experienced at watching Romeo in motion, at seeing the shapely, firm buttocks in front of him shift and flex underneath their cover of tight-fitted slacks. It was far more than an illicit indulgence.

He stood to lose a lot by this. His career and reputation, potentially. He was well aware of that, and yet he couldn’t seem to make himself stop. The chances of getting caught were practically non-existent and yet—Who was he kidding? In those magically charged minutes leading up to their big moment of intimacy, Julian would’ve risked everything to be with Romeo. He was lost, powerless in the face of the temptation Romeo presented to him, and he couldn’t seem to resist the whirlwind of emotions the man stirred inside him anymore than the snow outside could resist the fierce storm that whipped it around.

Romeo had stopped in front of him. Between him and the bed. Julian swallowed, nervous. Maybe Romeo was a little nervous, too, because he hesitated for a few seconds before turning around. He was just an inch or two shorter than Julian, and had to tilt his head up slightly to be able to look him in the eyes. It was almost too dark to be able to read their expression, but Julian could have sworn that the emotions in them were genuine. Arousal, excitement, anticipation. The same emotions that were leaving him with a flurry feeling in his belly. But there was something else, too. Something he never would have expected to see in the eyes of this cool, slick criminal. Awe. Fear. Romeo’s bottom lip trembled. Could it be that in this moment, he was as insecure as Julian was?

Strangely, Romeo’s sudden reluctance and vulnerability made Julian only more determined to have him. Romeo was stripped of his haughty superiority for once and he surrendered on a purely emotional level. Leaning in, Julian kissed him, and just like that, the spell was broken.

Romeo responded to the kiss with the unconcealed hunger of a starving man. They caressed, licked, teased, sliding their tongues together as they reacquainted themselves with all the shapes and peculiarities they had only just gotten to know a few minutes earlier. It was impossible to tell who had taken the next step, but suddenly, they were on the bed. Julian would have liked to keep up the pretence Romeo had built with his words but he forced himself to pick up the handcuff that was dangling loosely from Romeo’s arm. Its twin was still locked around Romeo’s wrist and for a few agonizing heartbeats, Julian feared that Romeo would fight him. But Romeo just glanced up at him with a tender expression in his eyes and raised his arm above his head.

A faint smile curled his lips when he said, “Not that I mind a little bondage, but you might want to take off my sweater first.”

Julian reached down and, sliding his hands underneath the black cashmere, he pushed it up over Romeo’s belly, shoulders and head. There was a second layer of thermal underwear to remove, then Julian was staring at one of the best-shaped, smoothest-skinned male stomachs he had ever seen. Unable to resist, he lowered his head and licked a long line upward from just above Romeo’s waist across his muscular chest and his neck, over his chin and all the way to his mouth. They kissed again, and the air around them was sizzling with pent-up arousal, but Julian managed to cling on to his self-control and reached for the handcuff again.

“Tell me what you like,” he whispered and gently took the tip of Romeo’s chin between his teeth.

“Just…oh, fuck me,” Romeo gasped. His voice had gone tight and he was staring up at Julian from underneath half-closed eyelids. Tilting his hips, he rubbed the hard bump at his groin against Julian’s thigh in the unmistakable search for friction. He seemed desperate, and Julian was only too happy to help ease his pressure.

He shifted down on the bed and undid Romeo’s fly, brushing a quick kiss on the tip of the swollen cock that sprang free, then he pulled the slacks over Romeo’s narrow hips and down his long, lean-muscled legs.

Romeo was breathtaking. He had the slender, graceful build of a ballet dancer and the need to have him, to explore every inch of this wonderful body, became overwhelming. Trailing his hand up one leg, Julian followed the curve of muscle to between Romeo’s thighs, then nudged them apart. He let his fingers wander higher, to that tempting, warm cleft but resisted the urge to dip into it. He’d do that later. First, he wanted to give Romeo’s eager cock some attention.

Leaning down, he kissed the tip once more. A drop of pre-cum moistened his lips and he gathered it with his tongue, savoring his lover’s unique, salty flavor. He drew a teasing circle around the slit then opened his mouth a little further, pursed his lips and brushed their moist inside to that highly sensitive patch of skin. Romeo let out a long groan as Julian started to suckle his dick gently. He tried to push up, but Julian stopped him with a hand to his stomach. Romeo let out another groan, more frustrated this time, but he obeyed and passively let Julian explore all the ways he could make him gasp, whimper and moan.

Hopelessly in love with books from a very early age on, Sage has dreamt of writing one for years while working on the day job instead. It took a very persistent character in the company of a much-adored Muse to finally get the first novel going. The fact that this gorgeous guy was gay came as a bit of a surprise, but it explained a lot.

Ever since, Sage has been the willing slave to all the fascinating guys who just keep queuing up and want their stories told. This has resulted in several published books and countless manuscripts at various stages of completion, so there's always something to work on—preferably at night when the rest of the house is asleep.

Sage's characters often have a dramatic and sometimes traumatic past and need to battle some demons to be with the one they love. But don’t worry, they get quite a lot of naughty action along the way to keep them happy and there will always be a happy end!