Hi Michelle, thanks for having me as a guest here today on your blog! I’m super excited to be here and to talk about my newest release, Impetuous [Incessant Passions 1]. Since I love a good series, most of my stories are connected and this one is no different. . The 2nd book in the Incessant Passions series will be released on January 24th.

Without further adieu, here is my new baby, Impetuous… 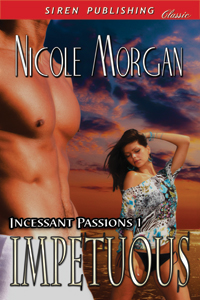 The Callaway Corporation recently bought the high-end resort property Jenny Jacobson manages. In that time, they have micromanaged both her and it into the ground. With no budget for repairs she does most of the work herself. She proves to be pretty handy with most of the daily mishaps, until she meets the mysterious drifter, Thomas Beck.

In the middle of a plumbing emergency, Beck comes to her rescue and fixes the problem, saving her from further disaster and costly repairs. Despite her best attempts, she cannot seem to get away from this man who shows up at every turn.

Regardless of her cold treatment toward him, he turns on his charms. Will his cocky arrogance mixed with his sexy smile break down her tough exterior? If so, what secrets is Beck keeping that could ultimately ruin any chance they have to find happiness together?

She had an edge to her, that was for sure, and he had no doubt she could be a savvy businesswoman, but something told him she wasn’t as tough as she was letting on.
No. Just beneath her tough exterior lay a woman, a sensitive and vulnerable woman. It wasn’t just in the moisture filling her eyes. It was the sadness he saw in them.
“Beck, are you listening to me?” Her annoyance came across loud and clear in her tone.
“Uh, yeah.”
“Good, because while I won’t be hiring you, I do appreciate the assistance. So, seeing as how you worked about an hour, how does thirty dollars sound?” She opened the folio and began writing out a business check.
He couldn’t hold back. He burst into laughter at what she considered to be a fair price for plumbing services. Thirty dollars? She couldn’t be serious, could she? The glare in her eye told him she was quite serious, though. Laughing at her probably wasn’t the best idea right now, but the scowl on her face was just too cute!
She cleared her throat as she closed the leather checkbook. “Beck, have I said something to amuse you?”
Quickly he closed his mouth and pursed his lips together. She wasn’t just annoyed—she seemed furious. Giving himself a few moments to contain himself, he shook his head in shocked denial.
“No. No, I’m sorry. It’s just that thirty dollars is hardly the going rate for plumbing services.”
She didn’t seem satisfied with his explanation, and he still couldn’t get past how damn cute she looked. Making it obvious she was angry with him, she leaned back in her chair and crossed her arms. It struck him then that on any other woman her demeanor would seem bitchy—somehow, though, he saw something else.
“Look, I am sorry. I didn’t mean to be rude. Seriously, though, Miss…” He waited for her to introduce herself, despite already knowing her name from Marianne.
“Jacobson.” She held her hand out to him. “Jenny Jacobson, pleased to make your acquaintance.”
Grinning when she shook his hand and squeezed hard, he wondered if this little, five-foot-nothing, brunette cutie could be any more adorable. While her manners were impeccable, she was a horrible liar. She was no more pleased to meet him than a fly would be to meet a spider.

Her creamy skin looked flawless against the backdrop of the crisp white sheets.
With both hands, he firmly held her legs apart and loomed just above her already slick folds. He could see the glistening moisture already building up and coating her slit. Her excitement and anticipation was evident.
Hesitating for a moment, he looked up at her. His eyes met hers for a fire-charged flash in time. Gently he blew on her. From her pussy on up to her nipples he caressed her with nothing more than a gush of air. His actions were rewarded by her moans as she squirmed under the warm tickle of his breath.
“Sugar, I hope you’re ready and rested. Because I’m going to lick you, taste you, and suck up every last succulent drop you have to offer me.”
This time he didn’t hesitate. His hunger wouldn’t allow it. Dropping his head down, he darted his tongue out and slid it between her moistened lips. Her slit was even wetter than he expected. And so fucking hot he thought his tongue might catch fire.
He had been right in his earlier prediction. She was the sweetest of all the fruits. Like candied ambrosia, her flavor just seeped into his soul and took hold of him.
His tongue moved up and down several times at her slick entrance. As good as she tasted, he enjoyed the tease it provided. She was already fighting him and writhing beneath his ministrations as soft whimpers escaped her. Judging from her body’s response last night and today, he knew she was already getting close. As much as he wanted to taste the honeyed nectar she’d surely provide him in orgasm, he wanted to slow down and prolong her pleasure.
Removing his tongue, he traced small circles around the outer part of her pussy, from one inner thigh to the other, the whole time touching her delicately, taunting her with featherlike kisses.
Her skin was so smooth under his tongue he wondered if she was even real. Maybe she was a goddess that he dreamed up. Some sort of muse sent down from a mythical land to seduce him in his wildest dreams. He fought back a laugh at the thought. If she were, she was damn good at what she did, but even his deepest fantasies had never been this good.
Her fingers ran through his hair, and she whispered, “Beck, please…”
He was never one to watch a woman suffer, but he had to admit his ego did swell almost as big as his cock from her pleas. It turned him on to know she needed it so badly she wasn’t afraid to beg.

And here’s a sneak peek at Tempestuous, which is now available for pre-sale!!
Michelle finally has her dream job working in a tropical paradise. Forced into a leave of absence by his father, Brad checks into the island resort. A chance encounter has them both walking a fine line between casual friendship and lascivious intentions. Will they throw caution to the wind and be…tempestuous?
Purchase Link: http://bookstrand.com/tempestuous
This title is offered at a 10% discount. Offer ends midnight CST, January 31st.