Today on Follow This! I'd like to introduce you to Bookstrand author, Jill Blair. Her steamy book, The Thirty-Day Gamble, is now available and definitely worth the investment!

What got you started in writing?
My earliest memory of writing was from childhood.  I sat at the kitchen table while my mother cooked dinner and wrote stories using paper towels for the pages.  My illustrations weren’t very good, but my mom would staple the pages together to make books and put them on the bookcase with her other books.  In my twenties, I started my first romance novel.

How did you feel when you got that first acceptance?
I didn’t believe what I was reading.  I was so used to receiving the standard rejection letter I ran into my girlfriend’s office (we were at work) with my iPad and had her verify what it said.  After jumping up and down, I called my husband.

What’s your biggest challenge as a brand new author?
Promotion.  When I started writing seriously three years ago, I was half way through my third book before I even told my husband I was writing.  Now I carry business cards with my book cover and web site to hand out to anyone willing to take it.


Jill's book, is now available! Click the cover to buy! 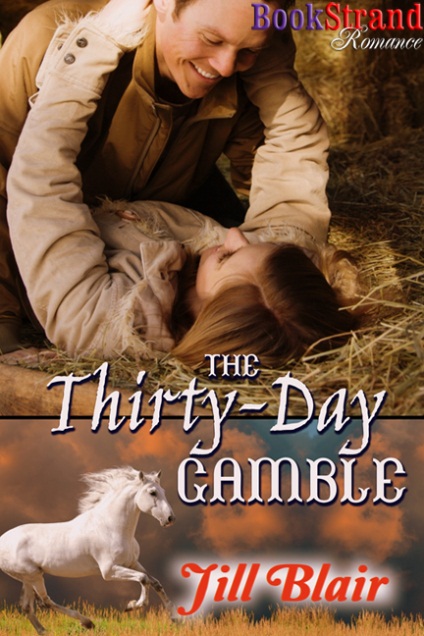 Blurb:
Oil broker Simone Banks desperately needs money—and lots of it—to finance her sister’s escape from a violent husband. Her only hope is to persuade the sexy owner of the Talbot Ranch to give her company, Plains Oil, the leases to the massive oil reserve beneath his ranch.
Brent Talbot is a renowned architect who fled his harried life in Los Angeles for an isolated North Dakota cattle ranch. He abhors the recent oil rush that has consumed most of Southwestern North Dakota and continually refuses all offers to extract the oil underneath his property, including those from Plains Oil.
When Simone is knocked off her feet by the sexy owner, both physically and carnally, in the first few minutes of meeting him, she knows she is in over her head. When she is forced to stay in the house with the seductive cowboy for thirty days in exchange for the leases, she knows she is gambling with more than money.


Excerpt:
Mothra-sized butterflies flapped inside Simone’s stomach as she pulled off the highway and under the wrought-iron pergola emblazoned with a giant TCR, the Talbot Cattle Ranch brand. As she drove down the long gravel driveway to the main house she noticed that, for as far as the eye could see, split-rail fencing caged acres of rolling yellow hills patched with occasional clumps of green bush.
She appraised the house as she approached, enthralled by the welcoming ambiance it emitted, even with its massive size. It was easy to see the architectural talent in the man who designed the two-story ranch style house.
The structure itself was a mixture of stucco and wood siding that looked as though it was part of the natural surroundings instead of an intrusion. The natural wood verandah wrapped entirely around the three sides she could see, and assumedly the back of the house as well. The gravel drive circled in front of the house and back out to the drive, creating a center area that had a water pond and patinated copper fountain bidding the weary traveler welcome.
Simone heard that Brent Talbot had designed and built the house himself. If so, she was impressed. Now if his attitude was as welcoming as his home, she had it made.
She pulled the four-wheel-drive rental Jeep in front of the plank steps leading to the wooden-and-leaded-glass front door and turned off the engine. She practiced her opening speech one more time before pulling the handle on the door and nervously leaving the safety of the Jeep.
With leaden feet, she ascended each wood stair and approached the front door. She was just raising her hand to knock on the heavy wood when it opened wide and a hard, muscled wall of a chest nearly mowed her down.
“Oh!” was all she managed before two strong arms caught her upper arms, pulling her toward the flannel-covered wall and preventing her from falling flat on her butt.
All words escaped her as she felt electricity from the two massive hands pulsate through her arms, surging shock waves through her nervous system and making her toes tingle in her shoes. The world around her dissolved as she looked up into eyes as blue as the deep ice of an arctic glacier. All thought was lost in the depths of the aqua-blue pools.
Her peripheral vision registered the handsome face behind the heart-stopping eyes. His face, tan and rugged, revealed a man who spent most of his time on the back of a horse riding the wild plains of the Dakotas. His nose was slightly bent, as though once broken and straightened just enough to add to his rugged outdoorsy handsomeness. He wore a day’s growth of beard across chiseled cheekbones and a cleft chin. His hair was surprisingly long for a cowboy, curling over the collar of his plaid shirt, and Simone fought the compelling urge to run her fingers through the sun-streaked strands.
Here stands every woman’s dream of the perfect cowboy hero, she thought. And she was in his arms. Although she had regained her balance, it did not occur to her to pull from his grasp.
“Are you all right?” His deep, masculine voice graveled delightfully across her spine, turning her knees to jelly.
“I didn’t expect anyone to be standing on my porch.” Brent Talbot didn’t recognize the woman he was holding but knew he would not have forgotten this mesmerizing woman had they met before.
She was petite, a good six inches shorter than his six-foot two-inch height, even in heels. Her hair, the color of a purebred chestnut mare, shone silkily in the morning sun. Pulled back in a clip, loose strands fell around her face, framing the fair, faultless complexion and rich brown eyes. Her small upturned nose perfectly complemented full lips colored the rich pink of the wild prairie rose.
It had been a long time since he felt the hot surge of desire rush through his bloodstream and settle in his groin. He thanked whatever deity was responsible for dropping this mesmerizing woman into his arms.
Simone finally found her voice as she whispered, “Yes, I’m fine.” She cleared the lump in her throat. “Um, I’m sorry.”
“Sorry?” he asked, his eyes not releasing hers.
“Yes, for being in your way.” Her mouth seemed to be talking without signals from her brain. God, I sound like such a ninny. Stop it! I’m a confident and capable businesswoman, she reminded herself. So stop acting like a silly schoolgirl with her first crush.
A lazy smile spread across his handsome face, a grin that showed white, straight teeth through lips Simone wanted desperately to feel against hers. Her breath caught in her throat and she instinctively leaned toward him, barely catching herself before actually tilting her head toward a kiss that only existed in her mind.