A true confession, huh? Oh, gosh. Generally, I’m a very boring good girl. Really, I am! So, I guess I’ll share one of my few bad and truly embarrassing moments. I like to drink, but not excessively. I know my limits. Seriously! We all know what happens when you drink too much. Some people get happy, some get angry, but inevitably they get sick and have one heck of a hangover the next morning. I get happy, yet I still get sick and have the mother of all hangovers come sunrise. That’s the part I hate. So I avoid it. A few beers on dart night with the team, a glass or two of red wine at night (We’ll call that adding to the doctor’s studies about whether or not it’s really good for a woman’s heart. I’ll let you know in a few years. :) but that’s it.


Until my honey decided one night that, after a year and a half of us being together, it was time to see me drunk. His idea, but not a very bright one. I tried to tell him this, but you know how well men listen to their woman. :) So, he takes me out and decides to fill me with Jager bombs. Did I mention this was a very, very baaaad idea? Again, I tried to warn him, but he just wouldn’t listen. So, I let him have his way, figuring it was the only way he would learn the lesson.


One Jager bomb, and I was okay. Two, and I tried, yet again, to convince him he didn’t want to go for three. Three, and my mission was accomplished.


I remember little after the third kicked in. I know he took me for what would have been a very romantic walk in the park along the river and we even made love. I told him we had to do that again when I was sober. I hit a brick wall, too. That didn’t hurt until the next morning. LOL He had to tick me off to get me back into the car. I don’t remember why or what he said. I passed out after that.


Needless to say, I accomplished my mission. He got some laughter out of the deal and he definitely learned his lesson. He hasn’t mentioned getting me drunk again since and that was over six months ago. Jeez, some of the things us women have to do to get our men to listen. *shakes head* No wonder we love them. :)


Where to find Tonya: 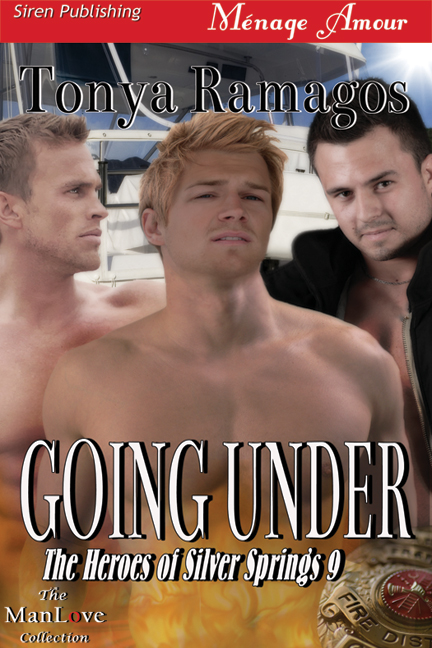 For a man who vowed never to fall in love, how can it be possible FBI agent Cameron Stone managed to fall twice? Hot on the trail of a missing fellow agent, Cameron finds himself in Silver Springs, hometown of DEA agent Adrien Bingham and firefighter Thaddeus Carter, and the last place Cameron needs to be. When emotions run wild and attraction explodes, can the self-proclaimed playboy hold on to his resistance?


Adrien never intended to fall for Cameron. Too bad his heart won’t listen. Then Thaddeus walks into his life, and his heart ends up in a train wreck of confusion.


Thaddeus knows Adrien’s heart already belongs to someone, but that doesn’t stop his pursuit. When he meets Cameron, he realizes the man is the one standing in his way. But when his own attraction to Cameron detonates, he’s left in a hell of a mess.


“Sweetie,” Adrien breathed, reaching blindly for Thaddeus’s shoulder. “You’ve got to stop that and let me get off of Cameron before I hurt him.”


Thaddeus repeated the path his tongue had taken, extending the trail up to Adrien’s throat, his chin, and then, God, yes, to his mouth. Adrien expected a featherlight kiss like those Thaddeus had laid on his back, on his abdomen and chest, on his throat and jaw. He expected Thaddeus to continue to tease, to heighten the wicked flames Thaddeus had ignited inside him.


He got the heightened flames, all right, but they came in the form of an explosion that sent him soaring as Thaddeus crushed his mouth to his. The kiss screamed of pure sex. It was a no-holding-back, I’m-so-glad-you’re-finally-mine kind of kiss. And Adrien felt it in every erogenous zone in his body. Then Thaddeus eased back, turned to Cameron, and Adrien watched as he delivered the same mind-altering, sinfully delicious kiss to the other man’s mouth.


Adrien took that opportunity to move, climbing off the bed on Cameron’s opposite side, and taking the liberty of removing the shorts he still wore from his short afternoon on the boat. His gaze dropped to his hands as he freed the button and lowered the zipper, but a prickling sensation along the fine hairs at the back of his neck had him looking up again. Cameron and Thaddeus were watching him, their heated gazes locked on his groin.


“Well, why did you stop?” Thaddeus asked, not bothering to lift his eyes.


Adrien let out a breathless laugh. “Because I suddenly felt like I had become the primary item on an all-you-can-eat buffet.”


Thaddeus grinned at the man. “Definitely.”


“That’s not how this is going to play out.” Adrien finished removing his shorts and pushed his boxers down his legs. He snagged a condom from the pocket of his shorts before kicking both articles of clothing to the side. “You, sweetie,” he told Thaddeus as he unwrapped the condom, “are wearing entirely too many clothes.”


“Oh, that’s an easy fix.” Thaddeus slid off the other side of the bed and made gloriously quick work of removing his clothes.


Adrien started to chuckle, but the sound got lost in another moan as his gaze fell down Thaddeus’s marvelously naked flesh. The man’s body was all hard-toned muscle and mouthwatering sinews that splintered Adrien’s thoughts and had his entire body screaming with the need to feel and taste.


Thaddeus shot him a toothy grin full of boyish mischief. “Well, I can, and I believe you were in the process of sheathing that spectacular cock that I desperately want inside me while I get to work on getting someone out of the rest of his clothes.” He moved to the foot of the bed, climbed onto his knees on either side of Cameron’s legs, and carefully walked his way up. His hands found the waistband of Cameron’s sweats and slowly began peeling the pants off Cameron’s hips.


Cameron helped by bracing his weight on his hands on either side of his hips and lifted them, allowing Thaddeus to pull the jogging pants all the way down, wincing as the move obviously aggravated his thigh.


Cameron’s sweats gone, Thaddeus still straddling the man’s legs, Thaddeus put his weight on one arm as he bent forward, curling his fingers of his free hand around Cameron’s ridged cock. Cameron sucked in an audible breath, and Thaddeus turned his head to Adrien, his dazzling eyes gleaming. “Is this what you had in mind?”


Only in my dreams. Adrien kept the thought to himself as his gaze moved slowly from Cameron’s face, down the man’s torso, skipped to Thaddeus’s head, and continued down Thaddeus’s body.


He had dreamt of this. All those lonely nights when he had lain in his bed staring at the ceiling, tormenting himself with memories and fantasies of both men, he had eventually fallen asleep only to wake short of breath, his cock aching, his heart splitting because scenes like this had played out in his dream world. He might be short of breath now, too, and yeah, his cock ached, but he was fully awake with a heart fit to bursting from happiness and love. This wasn’t a dream. It was real. And it was right.


“It’s exactly what I have in mind.” Adrien took a gamble, pulled open the drawer of Thaddeus’s bedside table, and found the tube of lube he sought. Both men watched him as he sheathed his cock with the condom, then spread a generous amount of lube down his shaft. He moved to the foot of the bed, assessing the amount of room he would have, and met Cameron’s gaze over Thaddeus’s head. “Is this going to work for you?”


Cameron looked at the ceiling. Adrien had already forgotten the mirrors hanging above the bed, but the other man obviously hadn’t. He met Adrien’s gaze again, a slow smile full of more joy than Adrien had ever seen on the man’s handsome face unfolding on his lips. “Yeah, it’s going to work for me just fine.”


Adrien crawled onto the bed behind Thaddeus, splayed his hands on the man’s back, and glided one down to the man’s waist, continuing with the other to the man’s ass. Thaddeus dipped his head. Adrien felt as much as saw Cameron shiver, and he knew Thaddeus had taken the man’s cock into his mouth. He saw Cameron’s hands fist the sheets on either side of his hips, and he met Cameron’s gaze as he positioned his cock at the entrance of Thaddeus’s ass.
Posted by Unknown at 00:00