Landing the Big Ones 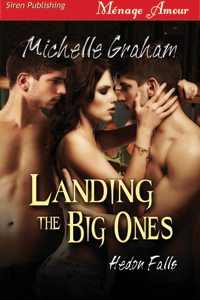 It is so exciting to see your name on the cover of a book! It is tentatively scheduled to be released by Siren Publishing as an ebook on January 8 and in print in June. Landing the Big Ones is the first book in a series set in the fictional town of Hedon Falls, Ontario. Here's a blurb and excerpts for your reading enjoyment!


When single mom Serena Keegan finally gives in to her son's pleas for a pet, they decide that fish are the perfect option for their apartment lifestyle. They quickly discover that they have a lot to learn about their aquatic friends. Thankfully, Dalton's Aquariums and More! is there to help. The owners, identical twins Lance and Liam Dalton, both find themselves attracted to her. They are eager to provide her with the assistance she needs, for the pets and for more...personal matters. Serena’s past experience with men has been less than stellar and she worries she and her son will end up hurt. Despite these fears, she finds herself falling for the sexy store owners, whose talents extend well beyond business. But Liam has a past he hasn't told her about and when Serena finds out, it threatens their growing love.

When they arrived at the store, Serena did a quick check in the car mirror and they headed inside. Disappointment flooded through her when she saw the young woman behind the cash register. But they were here to pick up a new fish, not see handsome men, she reminded herself. She followed Sam to a tank of bright red fish and was watching them dart around. She became aware of a strange sensation, like a prickling at her neck but much more pleasant. She turned and jumped when she saw Lance standing right behind her. He was so close that she had nowhere to go. She looked up at him, to find his eyes glued to her chest. Heat raced through her as he lifted his gaze to meet hers. Her focus narrowed, and he was suddenly the only thing she saw. As she stared, she heard his deep voice say, “What happened to this guy?” and Sam beginning to respond when it occurred to her that she hadn’t seen his lips move. With a frown she glanced toward her son and saw another man who looked just like Lance standing a short distance away.


Holy fuck, she thought. There are two of them.


She looked from one man to the other. They were indistinguishable from each other. So had it been Lance that first day, or his brother? And who was standing in front of her right now? Her head was starting to hurt again.


“We haven’t been formally introduced,” said the man in front of her. “My name is Liam Dalton,” He held out his hand and she took it. Tingling radiated up her arm and she felt her body reacting automatically, dampening her panties and hardening her nipples. She quickly withdrew her hand.


“Nice to meet you,” she stammered.


“The pleasure is mine,” he replied, glancing down at her chest again.


Serena squirmed as light spasms ran through her pussy. “So, were you the one—”


“With the hard-on the first time you came in here? Yes, that was me.” He had leaned close to whisper it and his breath caressed her ear.


He laughed, a low, sexy chuckle that made her stomach do flip-flops.


“Can I do anything for you today?” he asked, straightening. He was speaking the way any salesperson might, but Serena heard a deeper meaning in the question.


“The fish died,” she said stupidly, gesturing toward Sam.


Liam thankfully turned his attention away for a moment, and it gave Serena a chance to breathe. She’d been having a hard enough time resisting them when she thought they were the same person. Why was Liam hitting on her when she’d already turned Lance down?


“She probably died giving birth,” Lance was saying to Sam. “These fish have live births instead of laying eggs. I wouldn’t expect the babies to live too long though, not in a brand new tank.”


“Can we get another one?” Sam asked.


“Please! Please!” Sam’s lower lip jutted out in a pout Serena was well-acquainted with. But the men didn’t have as much experience resisting his cuteness and they gave in pretty quickly. They helped him pick out a guppy while Serena watched. She had to admit, they were both pretty good with him.


“You can bring a sample of your water in and we can test it for you to make sure it’s got all the right levels,” Liam said.


“Can’t you test that water?” Serena asked pointing to the dish.


“Not since it’s had a dead fish in it,” Lance replied.


“Can we get something to test it at home?” Serena asked desperately. She didn’t want to come back any more than necessary.


Serena’s face reddened again. She didn’t know why they were tormenting her like this.


“No,” she said. “You won’t be coming.” She glared at him, daring him to contradict her.


He looked at her for a moment then held up his hands in surrender and said, “Fine. Have it your way. You can get test strips to use.” He led her to a shelf and picked up a box. He explained how to use it and circled the ideal readings.


“Great,” she said. She followed him to the till and paid then turned around to call for Sam. He bounded over, the new guppy safely ensconced in its plastic bag, and they left.


It was easy to think clearly once she was away from the twins.


“Sam, did you know Lance had a twin brother?”


“But I thought you wanted me to be smart?” he said.


“Let me clarify,” she said. “Don’t be a smart-ass.” Sam giggled as they climbed into the car.


“I saw them both when you fell the other day.”


“Hmmm.” When she thought back, she did remember Lance mentioning a brother. She never dreamed he had a twin though. Well, maybe in her wildest dreams.


She turned and rested against the pillows. She spread her legs wide as she played with her tits a little more, loving the appreciative groans she got. She couldn’t believe how turned on this was making her. She’d never done anything like this before. She lowered her hand to her wet pussy and began rubbing her clit in slow circles, whimpering softly. Then she moved her fingers lower and slid first one, then another into her cunt. As she moved them in and out, she watched the men’s hands moving swiftly up and down their dicks. She withdrew her hand and rubbed her juices onto one nipple, the slippery liquid made her fingers feel just like a tongue. Then she lifted her breast again and licked the rosy peak.


She repeated the action with the other breast, extremely turned on now. Serena lowered both hands between her legs and, as she had the other night, began to finger herself with one hand while the other rubbed her clit furiously. She was moaning a little more loudly now as she raced towards orgasm. She closed her eyes and threw her head back, crying out as the spasms racked her body in wave after wave of pleasure.


When the orgasm receded, she lifted her head to see the men working to quickly undress. She watched appreciatively. Their chests and arms were well muscled and had a light mat of hair. But what really held her attention were their beautiful cocks. It looked as though they were identical there, too. They were long and thick, and she wanted them inside of her.


Liam finished first and jumped onto the bed. Serena laughed as he pulled her into his arms and kissed her, his tongue tasting her juices inside her mouth. He moved his lips to her ear and groaned, “I have never seen anything so incredibly sexy.”


The bed dipped as Lance joined them on the other side of Serena. His mouth came down on hers and she kissed him eagerly. Hands roamed over her body, squeezing and kneading her tits, stroking her slick pussy. Lance lowered his head to her breast and sucked the nipple into his mouth firmly. He licked it with light strokes and used his teeth to gently nip her. Serena cried out again. It was a new sensation but she enjoyed it. She felt Lance move between her legs, his dick poised at the entrance to her cunt, when reality managed to reach into her lust-fogged brain.


“Condoms,” she gasped. “Do you have condoms? I’m not on anything.”


Lance moved back slightly and gave a frustrated growl. “Shit!” he exclaimed. “I didn’t honestly think things would go this far. Liam?”


“Fuck!” Serena exclaimed. “I want you so bad, but I’m not going to risk another pregnancy.”


“I’m sure we can find ways to have fun,” Lance said, lying down on the bed between her legs. “Can I lick your pussy?”


“Don’t bother asking, just do it, dammit!” she growled at him. She reached down and grabbed his hair, lifting her hips to shove her snatch in his face. He thrust his tongue between her lips and darted it in and out of her cunt, doing with it what he couldn’t with his cock. Serena moaned loudly and ground herself against his mouth. He moved his tongue up her slit until he found her engorged clit and he began to lick it furiously. Liam’s mouth was on one breast while his hand worked on the other. Serena was sure she’d died and gone to heaven. Lance’s mouth on her pussy was driving her quickly toward another orgasm. The brothers worked her body with their tongues, and she finally came in the most intense orgasm of her life. She screamed out with pleasure, bucking her hips against Lance’s face, her hand buried in Liam’s hair as he sucked on a nipple.


A knock at the door made them all freeze. The door handle jiggled. Thank God I locked it, Serena thought.


“Mom?” called Sam’s sleepy voice from the other side of the door. “Mom, are you okay?” He knocked again.


“Fuck,” Serena whispered. Then she called, “I’m fine, Sam. I just had a…leg cramp…and it was pretty bad.”


“I’m going to get a drink of water,” he said. She could hear him shuffle across the hall to the bathroom and then the water running.


Lance and Liam moved up to lie down on either side of her.


Lance kissed her, his face still wet with her pussy juice, and she loved the way she tasted on him. When he had finished, she turned her head to Liam who kissed her, too. He lowered his lips to her ear and said softly, “I love the way you taste.”


“Love you, too.” They listened until they heard his door close.
Serena relaxed. “I’ve never had to worry about that before,” she said. She looked at Lance. “Then again, I’ve never come hard enough to make me want to scream.”
Posted by Unknown at 22:56