What got you started in writing? Oh heaven’s I’ve always been writing. From the time I was in middle school I’ve been writing. I honestly can’t tell you what it was that got me started, I simply know that I’ve always had a wild imagination and have wanted to create with it.


How did you feel when you got that first acceptance?    Stunned, giddy, excited, so many excited terms that I simply can’t find one that truly fits the sheer happiness that I felt
What’s your biggest challenge as a brand new author?  Finding ways to market my books without stepping on the wrong toes

What’s next for you? Well right now I’m doing a great deal of editing. Siren accepted my books 4-9 of the Paranormal Protection Unit. I’m also trying to finish up Book 10 for that series as well as a conclusion book for it. While I’m doing all of this I’m also created two additional series for Siren as well. Whew! Lots of writing, and I love it!


Tell us about your newest release. Out right now is Their Unexpected Mate, Book 1 in the Paranormal Protection Unit series. And coming out December 26, 2012 will be Book 2, Their Mating Illusion. Here is an excerpt of Book 1 - you'll have to wait for Book 2 just a little longer, we're still in the midst of the dreaded edits.
Where can fans find you? 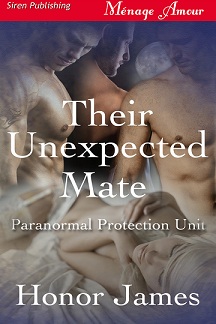 Sneezing into the crook of her arm, Katherine Douglas sniffed once, twice, and then a third time before pulling her ever-present Kleenex from her sleeve and wiping her eyes then nose. Wadding the tissue up and tossing it into the corner wastebasket, she sniffled again.


Taking the moment that she could, she leaned back, popping her aching and stiff back, and looked to her friend. “Good grief, I don’t think I could possibly dust, clean, or polish another thing, Bets. I’m exhausted,” she said and sat her plump rear on the corner of the antique Louis XVII desk.

“Come on, Kat, you can’t quit now,” Betsy Wilderbrand, aka Bets, told her friend as she grinned at her from the view screen. “You’re almost finished, besides.” There was a twinkle in her eyes as she leaned in closer to the computer camera. “You’ve never quit anything in your life, and you know as well as I do that if you quit now that asshat brother of yours will have a reason to point his bony, crooked finger at you and squawk about you squandering money.”


Shivering, Katherine crinkled up her nose and sighed. “Dammit, Bets, why do you have to be right?” she grumbled and picked up another piece of silver and the silver cloth once more. “He only reports each and every single dime that I spend in hopes that the attorneys will find a loophole and be able to take the inheritance from me and give it to him. Idiot.” That about summed up her brother. Dwayne Craft was truly a bastard of the nth degree and felt that because he was his mother’s oldest son, not even Wilder Douglas’s son, her father should have left his vast fortune to him, not his one and only true child. Her father had been kind, actually. He had given Dwayne fifteen million in his will along with two homes, but sadly her brother suffered from the same trouble his real father did, including gambling, drugs, and booze addiction.


“I know, honey.” Betsy Wilderbrand had been Katherine’s friend for years, had stood at her and her father’s side when she buried her mother, and then was there to hold her up on her feet when she had to bury the most important man in her life, her father. “That’s why Wilder made sure to put ironclad wording in the will. Trust me, your father knew what he was doing and my husband understood that as well as soon as he had met Dwayne.”


“True.” Wilder Douglas had been the single most amazing man alive. He had been taken from the Earth far too soon for his daughter’s heart, but he had touched the lives of so many in his seventy-two years. “I guess I just came into his life far too late, didn’t I?” Katherine felt the pain gripping her chest again, the ache that she always felt when she thought of her father.


“He loved you, Kat. You were his miracle, you and your mom both. Boyd and I knew Wilder before you came along and trust me, there was a change in him, for the better.”


It was so funny how easily Katherine forgot that Betsy was sixty-seven herself, forty years older than Katherine herself was. “All right, I will finish up here. Don’t forget that you and Boyd are supposed to come along in two months to try out the place. By then I should have the Wilder Resort up and running.”


“We will be there. Take care of yourself, kiddo,” Betsy said before she clicked the mouse to disconnect the connection to the camera and left Katherine to continue to clean.


Another sigh escaped the lips of the twenty-seven-year-old, but it was followed by a smile. “I can do this,” she said, and promptly sneezed again. “As long as I’m not allergic to this town, that is.” She blew her nose and wiped at her eyes. “Right, allergy medication needs to be added to the list.”

Quinlan “Mac” McAllister shifted in the booth, his gaze watching everyone in the bar even as he drank his Budweiser. His nose twitched when the newest patron entered the bar, the scent of weed and rubbing alcohol all but wrapped around the wiry-looking little weasel, literally, that walked in. Shifting, he grinned and looked to the other side of the room, giving a nod to his partner and brother who were playing a game of pool. Tapping his first finger on the rim of the longneck bottle gave the signal necessary to alert his former Delta brothers to the first player falling into place.


Sullivan “Sully” McAllister shifted, sinking the nine ball easily, and looked up to first Mac and then his other operations partner, Treasach “Scythe” Campbell. Tapping the tip of the cue to the velvet top of the table, he repositioned himself to move a little closer to the weasel, his bear growling in anger and offence from the smells coming from the little bastard.


Scythe ran his finger over the brow of his cowboy hat as if he had not a care in the world, and lined up his next shot, scratching the ball when he saw the next target entering and looking through the smoke-filled room to find the weasel that had taken refuge in one of the oversized wood and cushioned booths that gave a semblance of privacy. A large laugh came from the massive man as he slapped Sully on the back.


“Looks like drinks are on me,” he called to the bar. “Hey, Becky, how about you give out a round for everyone, on me.” Lifting his whiskey glass, he drained it in one drink and let out a rough sigh of appreciation of the fire that burned down his throat.


Now finally the mission they had worked most of the last year on was coming to a head. Thank the Moon Goddess on that one!


Subtle fluctuations and moves came from the trio of men as well as the three other Delta brothers in the darkness of the bar, and the click in their ears signaled that the ears and tech were there as well. Hell yeah, life sometimes was very, very damn good.


http://www.bookstrand.com/their-unexpected-mate
Posted by Unknown at 00:00