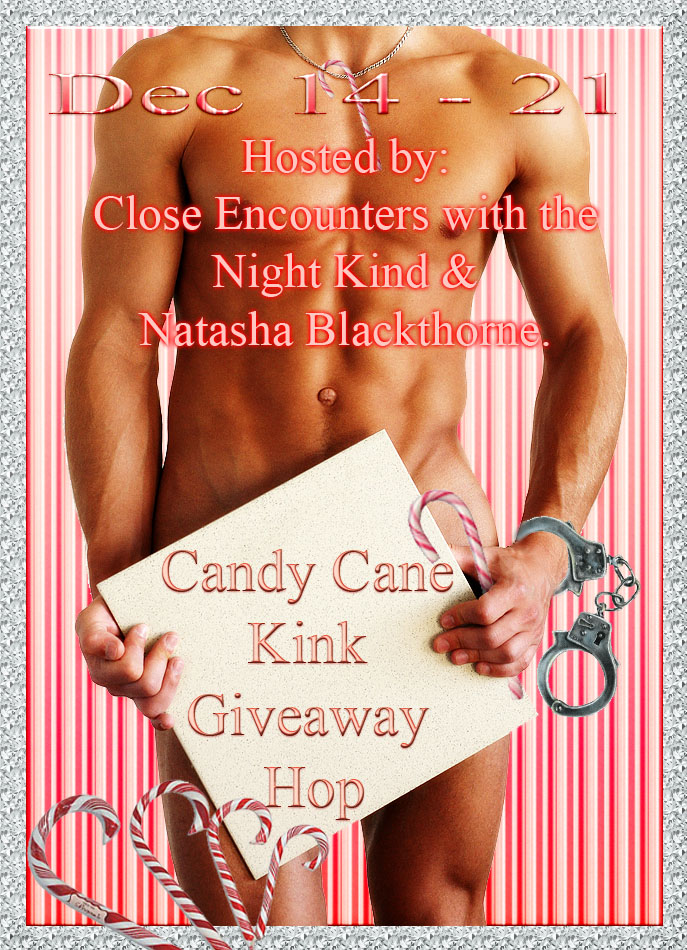 UPDATE: Dec. 22 - The Candy Cane Kink Blog Hop is now officially over and I have drawn a second winner to make up for yesterday's snafu. Congratulations this time to Jean MP! Thank you to everyone who stopped by and commented. Come back in the New Year when I'll be participating in the Naughty New Year's Blog Hop! Happy Holidays!

UPDATE:  Dec. 21 - Well, with all this end of the world nonsense, and being really tired (it was a very busy week at the day job), I forgot what day it was and actually drew a winner's name a day early. <smacks forehead>  Congratulations, Amy!  But since I was a day early, I'll draw another name tomorrow!

I'm excited to be participating in my second blog hop! I liked the first one so much and loved the chance to hear from so many different people!

For this hop, I'm offering another prize! But I hope you're into delaying your gratification, because it is a copy of my new book, Landing the Big Ones, which is being released in early January. I guess you could consider it a post-Christmas present. Leave me a comment below and I will draw on Dec. 22!

Jane gazed down into Liz’s large brown eyes and held her breath. She and Matt had talked about this so much, and now that it was actually happening, she was worried something would go wrong.


They had been best friends for years, and had been through many good times, and some that weren’t so good. Through it all, Liz had stuck by her side. Jane loved her dearly, though she had never really considered the possibility of having a physical relationship with her. She occasionally dreamt about it though, and when she mentioned the dreams to Matt, he suggested they act on them. That had been more than a year ago, and it had taken them time to work up to this point. Now, finally, Jane was holding her best friend, whose hands were lightly cupping her ass, and whose lips were every bit as soft and delicious as Jane had imagined they would be.


Liz looked at Jane, then over at Matt. Jane saw a tiny bit of moisture gathering at the corner of her eye, and when she met Jane’s eyes again, she smiled.


Jane exhaled as relief washed through her. “Liz, it makes me so happy to hear you say that.” She brought her lips down to Liz’s again and they began moving in unison. Their tongues explored within each other’s mouths, and Jane groaned when she felt Liz’s hands kneading her ass.


Time to make her mine.


Jane slid off to Liz’s side and slipped her hand under Liz’s shirt. Her breasts were large and firm, and the nipples made hard little points underneath the sports bra Liz wore. Jane pinched them between her fingers before she pushed her way underneath. When her hand connected with the bare flesh of Liz’s breast, both women moaned.


Jane couldn’t get Liz naked fast enough. She pulled her up and tugged the shirt over Liz’s head, and then followed that with the sports bra. Jane stared at Liz’s beautiful tits. She had seen them before, but knowing now that she could touch them, and lick them, and squeeze them, made them so much more appealing. She leaned down and pulled one of the pink nipples into her mouth, flicking her tongue back and forth across the tip as Liz gasped. Jane pinched and pulled on the other nipple while her mouth worked on the first. Then she switched. Liz buried a hand in Jane’s hair and held her head in place as she cried out softly.


As she sucked eagerly on Liz’s tits, Jane began tracing circles on Liz’s stomach. She gradually moved her hand down until she reached the waistband of Liz’s pants. She grasped the pants and underwear and began tugging them down. Liz wiggled and shifted beneath her to help get the pants off. When they were down to her knees, Jane moved her hand back up to Liz’s pussy and began to gently caress her mound. She flicked her fingers across Liz’s swollen, wet lips, and then pushed one in between to touch the engorged clit.


Jane smiled and pressed her lips to Liz’s mouth again as she inserted a finger into Liz’s slick vagina. She had never felt another woman before and she enjoyed the warm, wet feeling as she slid her finger in and out.


“More! Put another finger in me!”


Jane was happy to comply and as she fingered her best friend, she began kissing her way down Liz’s neck and chest, pausing to suck on each nipple in turn. Then her mouth moved down Liz’s stomach until she was settled between the other woman’s thighs, staring at her beautiful pussy. Anticipation had Jane’s pussy dripping and clenching in spasms of desire. She had never tasted a woman’s cunt before, but she wanted to. She wanted to bring her friend the most pleasure she could.


Leaning forward, Jane touched her tongue to Liz’s clit. Liz cried out and her hips jerked beneath Jane’s face. Jane began sliding her tongue in circles around the hard little nub. The taste was slightly salty and a little musky, but it was extremely pleasant and had flames of desire shooting all over her. She circled her tongue faster as she pumped her fingers in and out of Liz’s pussy.


Liz’s moans and cries grew louder. “Jane! That’s so good! Oh my God!” Liz reached down and grabbed Jane’s hair. She pushed her pussy up against Jane’s face and wiggled her hips back and forth. Jane sucked Liz’s clit between her lips and held on while her friend went wild beneath her. She screamed as her pussy clamped down on Jane’s fingers and her clit pulsed against Jane’s tongue.


Jane held her mouth against Liz’s pussy until the last wave had passed and her body went limp. Jane pulled her fingers out and moved up to kiss Liz gently.


“I can taste myself on you,” Liz whispered.


“You taste so good,” Jane replied.


They continued kissing as Liz’s hands began to explore Jane’s body. Then she pushed her friend over and lay on top of her. She looked into Jane’s eyes and said, “Now it’s your turn.”