I was thrilled recently to make the acquaintance of Evernight author Doris O'Connor. Amazingly enough, this woman has NINE children (yes you read that correctly) and still finds time to write. I'm in total awe! She's got a new release coming up that she'd love to tell you about, so I'll turn things over to her!

Happy Sinful Sunday to you all, and thanks to Michelle for letting me ramble on here.

Hmm, what isn't, would be a more accurate description, really ;-)

Is there anything more sinful than an escort service aptly named Mr. Satisfaction Guaranteed? I still recall the original spark for the idea behind the series. Hubby and I were sitting in a crowded hospital waiting room, discussing ideas for my books, and he suddenly blurts out, "I think you should do a male prostitute."

In this installment we have some m/m action and some m/f/m play, spanking, bondage, and some public exhibition and inappropriate use of raspberries.

Have I got you intrigued yet? 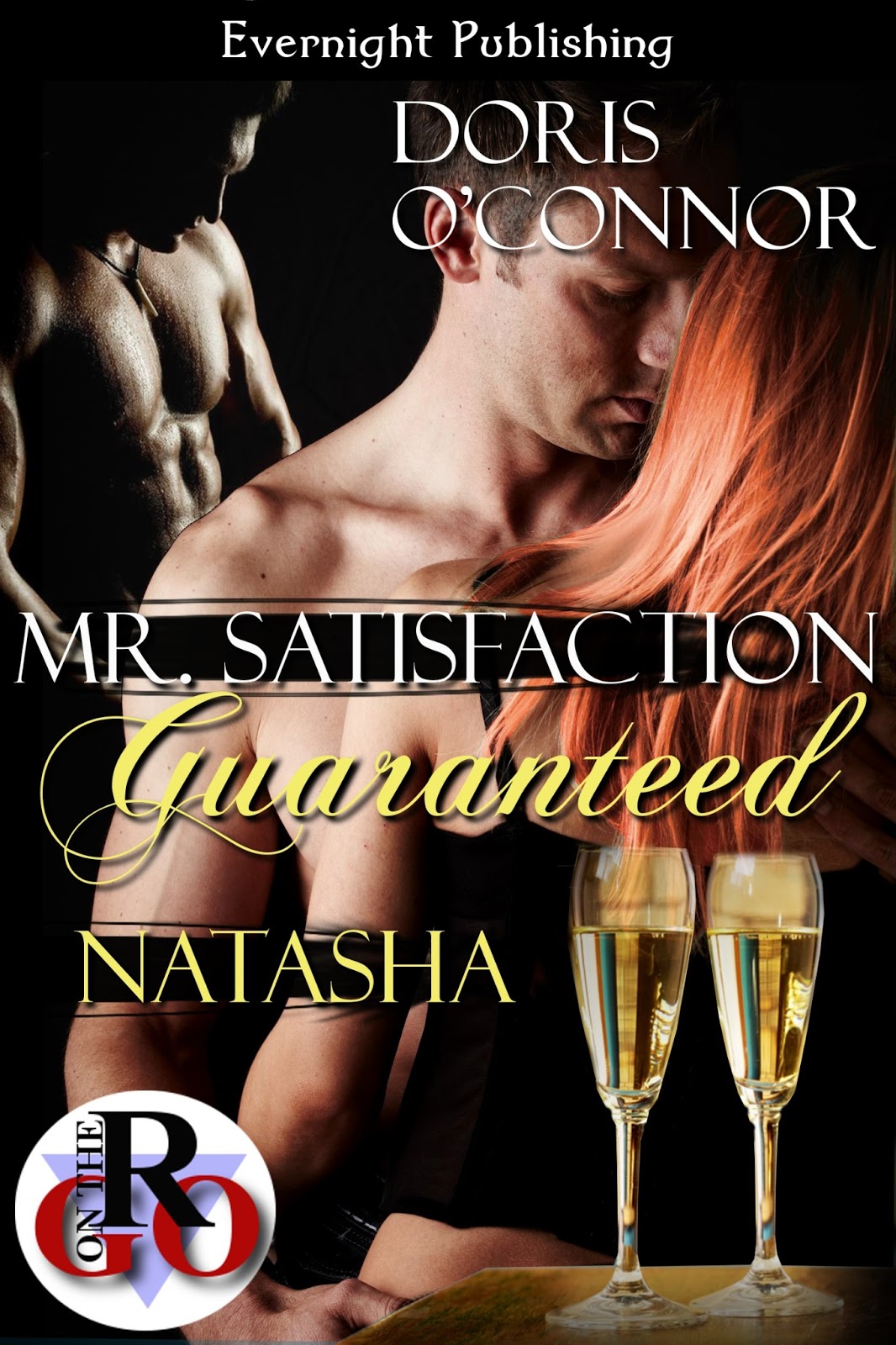 Blurb:
Mr. Satisfaction Guaranteed, the card said – what a pretentious name for an escort.

Still, cancer survivor Natasha has to do something to reclaim her sexuality after her reconstructive surgery, and he comes highly recommended, by her mother no less.

When she meets the experienced Dom, he makes every submissive bone in her body sing, and wish for things that can never be. Or can they? Fantasy fulfillment is all well and good, but she is just another client.

As they test all of her boundaries, will their one night heal her, or break her?

Excerpt:
"I want you to play, pet. Play, or safe word out. Those are your two options. I suggest you use them wisely."
The pressure on her shoulders increased, just enough to get slightly painful, and she took a deep breath. She could do this. She wanted to really. She ran her fingers over the keys, the movement so familiar, yet strange after all this time, and she shut her eyes.
Something haunting he'd said. How very fitting. Without any conscious thought on her part, her fingers flew, and she lost herself in the music. Tears gathered and dropped on her hands, yet still she played, her body swaying with the music. By the time the last few notes of Chopin's Nocturne in E minor had drifted off into the ether, she felt at peace. Natasha floated on the high that playing the piano had used to give her all the time, before her cancer treatment had blown up her fingers and made playing impossible. She acknowledged the thought, but caught in her bubble of happiness and achievement, it did not have the power to hurt her just then.
When she opened her eyes, it was to find SG watching her. Heat rose in her cheeks, and her cunt clamped when she realized what she was witnessing.
He was leaning against the piano, his legs spread wide, and Jonas was giving him head. She sucked in a breath and hastily pulled her eyes back up to SG's face. He smiled at her, and against her better judgment her gaze darted downwards. Jonas chose that moment to come up for air, and her clit clenched in need when she got her first proper view of SG's cock. Slick from Jonas's mouth it glistened and quivered. Jonas put one hand on SG's thigh and grasped the other man's heavy ball sac with the other. Jonas squeezed and then sucked one testicle into his mouth. SG's groan of pleasure made her breathing hitch. She shouldn’t be witnessing this moment, but she couldn't drag her gaze away either as Jonas ran his hand up and down SG's huge cock. Pre-cum leaked on his fingers, the scent of sex heavy in the air, and Natasha licked her lips. She could almost taste the spicy, salty essence in the air. SG groaned again, the sound so low and sexy, moisture trickled past her pussy lips and onto her thighs.
Who'd have thought that watching two men in action would be such a turn on, let alone that SG would actually give her that particular fantasy. She could feel his gaze on her face, on her breasts and lower, scorching her skin as though he was running his hands over her sweat slicked flesh.
"Touch yourself for me while you watch, pet. You know you want to. But do not come without my permission. "
Natasha balled her hands into fists, horrified to see them in her lap. She seemed to have spread her legs wide, too, giving SG, and Jonas for that matter, should he chose to look across, a perfect view of her wet cunt. She should have been mortified, but instead white hot arousal coursed through her veins. Her breathing grew heavy in tune with the men, and she ran her fingers through her wet slit. A moan escaped her lips, as the familiar tingles started. Circling her clit, she felt it swell under her fingertip, just as SG's cock swelled and pulsed. Jonas set to work in earnest, and SG grabbed the younger man's hair and started to fuck his mouth. Faster and harder they all worked together, to reach the pinnacle. Her fingers fell away as SG came with a roar of completion, and Jonas's throat worked overtime swallowing down his seed. She was so close, so goddamn close, but he hadn’t given her permission to come, and she couldn't push herself over that cliff without it, she just couldn't.
So she stopped, not daring to move, as the cool air on her swollen folds alone started the familiar tingles of bliss. She bit her lip, and dug her hands into the leather of the piano chair. Perspiration broke out all over her body, but somehow she staved off the impending orgasm.
By the time she had herself back under control, Jonas had finished licking SG clean. He pulled the younger man up by his hair and the rough kiss that followed between them had Natasha teetering on the brink again.
Jonas was flushed and breathing so heavily his pants filled the still room when SG broke the kiss. The outline of his erect cock was clearly visible through his fitted trousers, and Jonas groaned when SG took him into a firm grip through the fabric.
"Want to help our boy out here, my pet? I think he deserves a treat, don't you? And as you've been such a good girl you deserve one, too. Jonas here does wonders with his tongue." He patted Jonas's head, and the young man colored and bowed his head in submission.
Natasha couldn't tear her eyes away from the outline of that erection, and SG chuckled. He released Jonas who immediately resumed his previous position on the floor. SG pulled Natasha to her feet so roughly that she would have stumbled, had he not picked her up and set her on the piano. The keys clanged as her feet settled on them. Natasha winced at the sound, before his mouth came down hard on hers and she forgot to think altogether. He tasted just as she imagined he would, raw, masculine, earthy, with just a hint of Jonas's scent still clinging to his firm lips. He shifted, and another set of hands spread her thighs wide, before an extremely skillful tongue delved into her channel, and she screamed into the kiss SG gave her.
He broke the kiss and smiled at her, the warm approval in his eyes her undoing.
****

Author Bio:
Glutton for punishment would be a good description for Doris... at least that's what she hears on an almost daily basis when people find out that she has a brood of nine children, ranging from adult to toddler and lives happily in a far too small house, cluttered with children, pets, dust bunnies, and one very understanding and supportive husband. Domestic goddess she is not.

There is always something better to do after all, like working on the latest manuscript and trying not to scare the locals even more than usual by talking out loud to the voices in her head. Her characters tend to be pretty insistent to get their stories told, and you will find Doris burning the midnight oil on a regular basis. Only time to get any peace and quiet and besides, sleep is for wimps.