Today I'm taking a break from my usual True Confessions feature for a one-day blog tour from author Kevin Klehr, whose book Drama Queens With Love Scenes features my guilty pleasure, gay men! And in celebration, you can enter the Rafflecopter Draw to win your very own copy of the book! 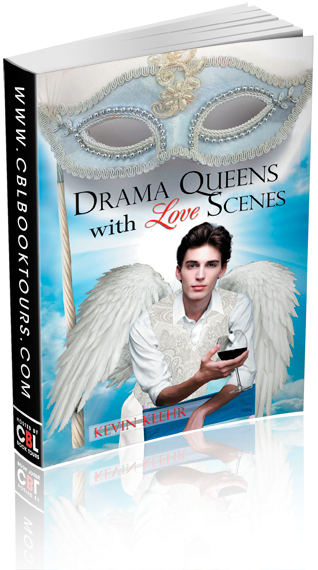 Close friends Allan and Warwick are dead. They're not crazy about the idea so to help them deal with this dilemma are Samantha, a blond bombshell from the 1950s, and Guy, an insecure angel.

They are soon drawn into the world of theatre - Afterlife style, with all the bitchiness, back-stabbing and ego usually associated with the mortal world. Allan also has a secret. He has a romantic crush on his friend, Warwick, but shortly after confiding in his new angel pal, his love interest falls for the cock-sure playwright, Pedro.


Not only does Allan have to win the heart of his companion, he also has to grapple with the faded memory of how he actually died.


The music had become upbeat since we entered. Nellie gently swung her hips while one hand snapped in rhythm to the beatnik-like tune. The drummer and the guitarist played it hip in dark sunglasses, as if posing for a fashion shoot. The spiky haired bass player soulfully strummed his instrument like it was an extension of himself. I wanted to be his groupie ready to take on his deep throbbing melody.
Around us, groovy patrons found their swing. With arms waving and bodies gyrating, they crowded the floor.
“Is this jazz feel too cool for you, Guy?” I asked.
He propped his chin on both hands, staring at us through blurry eyes and gesturing more gracelessly as the orange liqueur took hold.
“In this state,” he mumbled without moving his jaw, “I could even listen to Barry Manilow.”
He downed his drink as if it was water waiting for a marathon runner.
“Come on guys,” I said. “There’s a party in full swing. Why aren’t we dancing?”
I shuffled my feet into the crowd, holding hands with my drinking companions. We oozed into the jumbled rhythmic pulse of the bodies twisting and spinning around us. There was no Warwick or Pedro here to make me sad, just a group of friendly strangers sharing the beat.
Guy created his own tempo as his hands clapped out of synch. Even his wings got into the act, making him look like a seagull caught in a fishing net. Maudi’s upper half gyrated back and forth, yet still poised like the cultivated lass she was.
I danced with them but somehow in my own space, wanting to shed my skin and take the joy of this party home with me, albeit with just the bass player. The primal pulse of his talents would inject the same life into me as he was to his instrument. We’d come alive, sweaty, breathless, ecstatic!
“Allan, darling,” said Maudi. She leaned over to my ear like Mata Hari about to share a password. “That bass player is sober. You are drunk.”
“So?”
“So if you approach him you’ll look like a sleazy rogue.”
“How did you know I was interested in him?”
“Sweetheart, nobody here can miss your unsavory curiosity. You’re slobbering over him like he’s a juicy peach.”
“And how I’d love to nibble on that peach. And that banana as well.”
“Dear, take the matter in your own hand. No one will get hurt.”
“What about friction rash?”
She shook her head. As she pulled away, Guy gazed at me, clawing his hand and purring like a tiger. Was he sending me up or saying he was horny as well? I considered it. My sex life was on life support, but would I go to hell for sleeping with an angel?
From that moment on, the rest of the soirée was a bit of a blur. I recall being chatted up by a sexy bald headed gent in a white safari suit, or at least I’d like to think he was chatting me up. Guy danced on one of the tables to a jazz version of “Shaft.” Hearing Nellie croon “Shaft” was equally bizarre. A dreamy guy was sung “Happy Birthday” while blowing out candles on a cake.  Some poor elder tripped backward onto the cake. I think a group of girls helped him scrape the baked delights from his shirt, but they seemed a little anorexic so perhaps they were just hungry. I believe a man was dancing in white boxers, or maybe he was a stripper?
“Here, try this.”
While my head was filled with delightfully twisted fantasies of me and the bass player, the birthday boy sidled up and shoved his finger in my mouth. Rich gooey white chocolate melted down my throat.
“Is that the sample pack?”
“If you play your cards right. Besides, I have a mad desire to show off my birthday suit.”
“Do I get to blow out the candle?”
He grabbed the back of my head and pulled my mouth to his moist lips. Our tongues swam, locking us to each other. An addiction I didn’t want to break. I could hear the bass urging me to take this man home. Its sensual strum wouldn’t lead me astray. But this man would, with all the right moves. 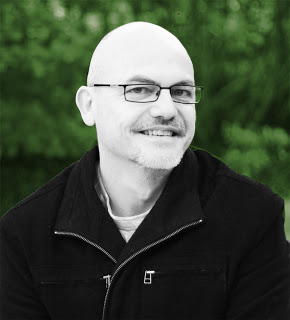 Kevin lives with his long-term partner in their humble apartment (affectionately named Sabrina), in Australia’s own ‘Emerald City,’ Sydney.
From an early age Kevin had a passion for writing, jotting down stories and plays until it came time to confront puberty. After dealing with pimple creams and facial hair, Kevin didn’t pick up a pen again until he was in his thirties. His handwritten manuscript was being committed to paper when his social circumstances changed, giving him no time to write. Concerned, his partner, Warren, snuck the notebook out to a friend who in turn came back and demanded Kevin finish his novel. It wasn’t long before Kevin’s active imagination was let loose again.
His longest running passion is a weekly radio program he produces with Warren for local Aboriginal and Torres Strait Islander station, Koori Radio. Since 2004 they have been discovering music, both new and old, and interviewing local artists and community leaders. Every Friday night, The Rhythm Divine is heard across Sydney and via the world wide web.
Author Contact Links:

a Rafflecopter giveaway
Posted by Unknown at 00:00