Today I'm thrilled to welcome new author and fellow Canuck Diane Leyne to my blog. Though honestly, the woman publishes books so fast, she's practically an old pro now. We were release day sisters for her first book (No Place Like Home) on Feb. 21, and she just had her third released last week, with more scheduled. Lucky for her readers! Anyway, I'm going to turn it over to her. Enjoy!

What got you started in writing?
I've always been a big reader.  I love all sorts of popular fiction, mystery, suspense, thrill, romance, erotica.  In other words, I just plain love to read.  I've always enjoyed writing, but for many years it was just for school and then for work.  I made on or two attempts in the 90s, but I really never put everything in to it.  And traditional publishing is very hard to break into.  Forget submitting a book to a publisher.  First you have to write the book and then you have to find the agent.   But if you don't have a track record, you can't get an agent and if you don't have an agent you can't get published and develop a track record .

Finally, a couple of years ago I discovered Siren Publishing and started devouring their books.  Looking at their website, one day I clicked on their "Submissions button".  I realized that not only did you not need an agent to submit to Siren, but they had a minimum requirement of only 20,000 words which made writing my first one far less intimidating.

How did you feel when you got that first acceptance?
I was over the moon.  I was at work and I hadn't told anyone about the submission.  I was bouncing in my chair shouting "they're going to publish it" and everyone thought I'd lost  my mind.

What’s your biggest challenge as a brand new author?
The toughest is building an audience and also trying to understand what my readers would like to read.  Part of writing is pleasing yourself, but you also have to make sure that you are leaving your readers satisfied.

They have also accepted the first book in my new ménage shape shifter series, Call of the Wolf.

Club Libertine 1, Changing the Rules, is the story of Michelle, Mac and Sean.  Ten years earlier, Michelle and Mac were young, in love and living together with his best friend Sean, who also loved Michelle.  One night, they end up in a ménage and the next morning, Michelle panics.  She'd been raised very conservatively and already felt guilty about living with Mac.  She couldn't deal with the three-some and ran away.  In the present, Michelle, now a successful lawyer, finds herself heading west to see Mac and Sean to try to pay off a loan her family has run up and is about to default on.  She's shocked by the amount of the debt and by the fact that they want her to spend the next month as their sub if they forgive the debt.

She still loves them and looks at this as a second chance, but will their residual hurt and distrust stand in the way of all their happiness? 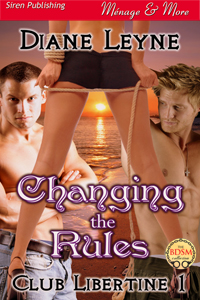