I'm happy to be hosting Lori Toland on this blog tour for her newest release, Dangerous Submission. 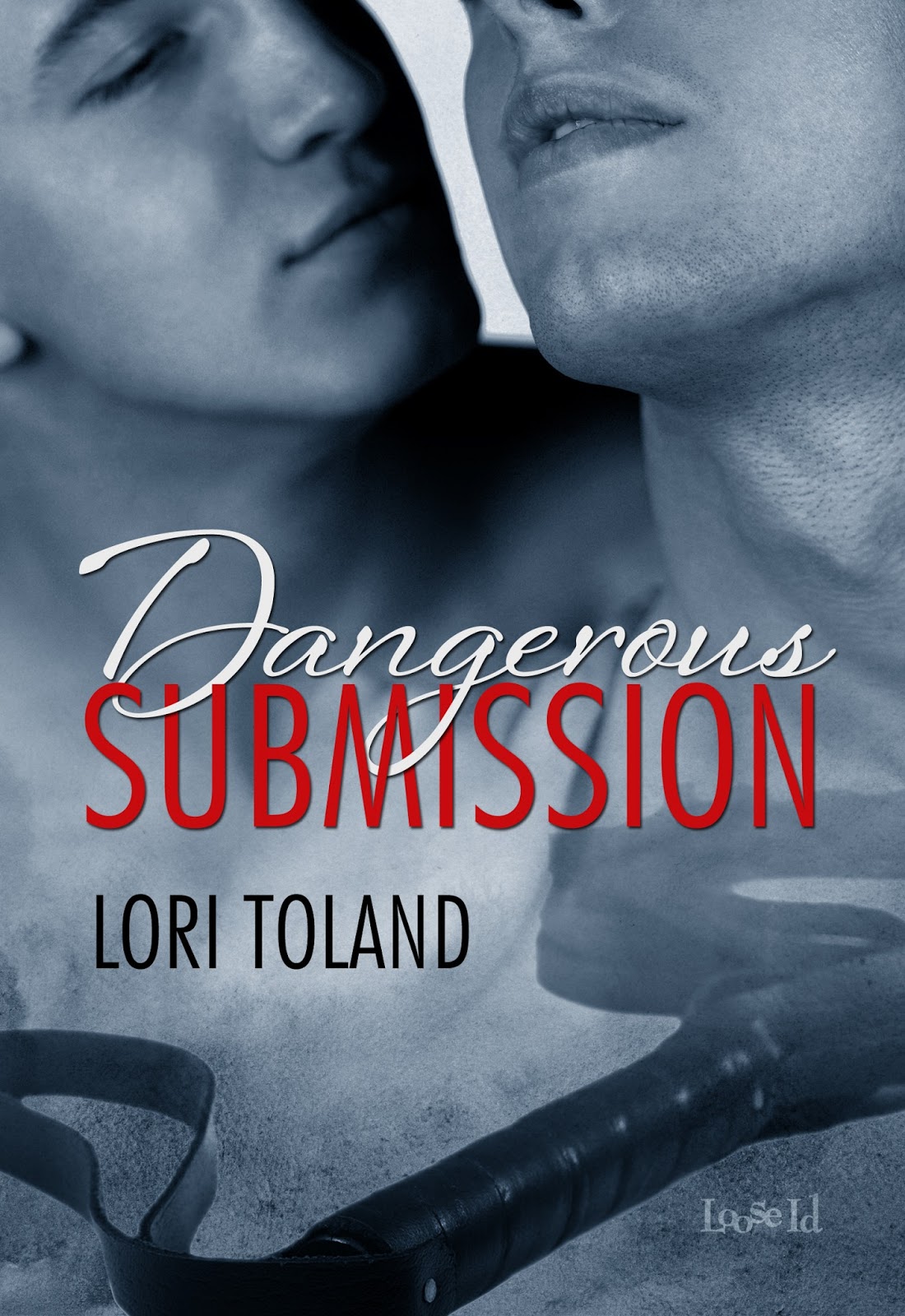 Now they are caught up in a web of lies as they pose as members of the jet-setting crowd. Drake and Robbie have to race against the clock to stop a weapons haul that could threaten the safety of all Europe. As their covers begin to fade and danger is closing in, protecting Robbie is Drake's most important task, but neither man is ready for the moment when their hearts are put on the line.

His eagerness to get started made me smile. I grabbed his shoulder and stopped. “Maybe you should take your shirt off before you get strapped in.”

He glanced down at it and took off his black thick-framed glasses. The apology he gave was muffled as he pulled his polo shirt off. Pale skin without a freckle anywhere on his slender frame made my mouth water. Unlike me, he had very little hair on his chest, just a tuft in the middle and a few stray hairs circling his flat brown nipples.

Encircling his slender wrist, I noticed how big my fingers appeared next to him. I guided his arms up and snapped the cuffs in place one by one. Once he was secure, I pulled on his bonds to make sure he couldn’t move too much.

Robbie pulled on them as well before he looked over his shoulder at me. “Why do you need to tie me down?”

“Because I’m not going to have you endanger yourself if you decide to move midstrike.”

Satisfied with my answer, he nodded, but as he turned away, he swallowed hard. He needed compassion but also needed to be aware of my competency.

I leaned in, placing my hand on his bare back to bring his attention to me. “Let’s get something straight right now. I won’t be questioned by you. You will do as I say, or I will turn you over my knee and spank you, regardless of where we are or who is in front of us.”

“Yes.” I punctuated the word with a crack of my whip.

He jerked, startled by the sound. “I’ll remember that, Sir,” he said.

As close as I was, the heat coming off him soaked through my clothes and into my body. He shivered, and it reverberated through every inch of my body. “Are you cold?” I asked.

“I’m fine, Sir.” The underlying tremor in his voice belied his calm demeanor, and he stayed tensed in anticipation of my next move. With him bound and waiting for my next touch, a heady thrill of power flowed through me.

If I stepped directly behind him, I was almost tall enough to notch my chin on the top of his head. The cologne he wore wafted up to me, and the dark scent beckoned me to come in closer.

Unable to resist temptation, I bowed my head to press my lips against his shoulder. He tasted salty from the light sheen of sweat, and the smell of his cologne mixing with his musk pushed me past the point of intelligent thought.

Without taking my mouth away from his delectable skin, I whispered, “These chains are also good for keeping you at my mercy. I can do anything I want, and there’s not much you can do to stop me.”

I expected him to stiffen against me in protest, but his eager cry came as a shock. “God, Drake, yes!” He shoved his hips back against me, the cleft of his arse sliding down my rock-hard prick.

Oblivious to my desire, he turned back to his suitcase and dragged out his tuxedo. “This party we’re going to tonight, it’s a black-tie ball, right?”

“Yes, it is.” I turned my back to him, trying my hardest to ignore how much my cock loved him nearly naked with just a scrap of cotton covering his bits.

“Do you think there will be dancing?”

God, I hoped not, because I was an awful dancer. Robbie would run away screaming from me if he saw me try to waltz. I mumbled something under my breath, hoping that would satisfy him.

He was persistent with his line of questioning, though. He let out a sigh. “What I’m trying to ask is…do you know how to dance?”

“Maybe I should give you a quick lesson.”

Unable to hold back my horror, I groaned. “We don’t have to do that. It’s not a requirement to dance at this party, I’m sure.”

“No, it probably isn’t, but we aren’t supposed to be wallflowers either. We should try our hardest to fit in.”

“I’m six foot five, and you’re a redheaded royal. Do you really think we’re going to blend in?”

Michelle's Review of Dangerous Submission
(Disclosure: I was provided a free copy of this e-book for the purpose of providing a fair and honest review)

Lori Toland’s writing was a pleasure to read on a number of levels. She has great technical skill, which I appreciated. Nothing pulls me out of a story more than typos in a book, especially if they are excessive, but I didn’t have that problem here. Ms. Toland’s story was an original take on the “co-workers forced to work in a sexually charged environment” theme and the tension between her heroes was fantastic. And lastly, the sex was hot! I don’t usually read MM, but I found I enjoyed this one more than others.

I only have a couple of criticisms, and they’re small and really more a matter of personal preference. The first was Drake’s habit of thinking how much he wanted to fuck Robbie. Not that it’s a problem for him to want that, and his desire is important to the tension, but to me it seemed to come out the same way every time and it could have been varied a bit. The other thing I found was that while I liked having all the threads tied up at the end, it seemed to go on a bit longer than I needed. But these are just little blips in what was, overall, a wonderful read.