Thank you to everyone who stopped by for this blog hop. I'll definitely do it again soon. Plus, you can check out my other features (Sinful Sundays - coming soon; True Confessions Tuesday; Really Random Wednesday; Follow This! Friday; more to come!) and keep up to date on my new releases.
Hope you all have some hot and happy winter nights!
Michelle

Original Post
I'm thrilled to be participating in my first ever blog hop! Hosted by Nicole Morgan, this hop will have you visiting some HOT writers, and getting great ideas on how to keep yourself toasty warm this winter!

For my own contribution, I've included a short, FFM story for you. I hope you like it! Leave me a comment and you'll be entered to win $5 in StrandBucks to be used at www.bookstrand.com! I'll choose the lucky winner on December 5th! Please make sure you leave your Twitter handle or email address so I can contact you!

All comments will also be entered in the GRAND PRIZE draw for a prize pack worth more than $100! The prize pack includes a $50 Amazon gift card, $10 in StrandBucks, plus a package of 11 ebooks guaranteed to warm you up fast!

After you read my story and comment, don't forget to visit all the other participants on the list below! They're all offering great prizes and the more you comment, the more chances you have to win! Happy hopping!


“My fingers are going to fall off!” Liz exclaimed, stamping her feet on the mat outside the cottage door. She opened it and stepped inside, relishing the warm air that enveloped her.


“You need to get better gloves,” Jane told her. “Those ones are far too thin for these long treks.” She closed the door behind them.


Liz wasn’t sorry to be leaving the cold outside. She enjoyed her ski trips with Jane and her husband, Matt, but she really did need to invest in better gear. She pulled off the offending gloves, stuffed them in the pocket of her ski jacket, and began to pull off her boots. Jane did the same nearby.


“Hey, girls!” Matt called from the other room. “I’ve got some soup all ready for you!”


“Your husband is amazing,” Liz said as they made their way to the kitchen. “He may just keep me from dying of hypothermia.”


Matt smiled and swatted her on the butt. “You know I love to help keep you warm, Liz,” he teased. He waved her toward the table, which was set for three. Steam wafted up from the soup bowls and large glasses of wine stood at each place. The three friends settled in to enjoy their lunch.


By the time the sun had faded from the sky outside, three empty wine bottles stood on the kitchen counter. Liz, Jane, and Matt were seated on the floor in front of the fire. Liz was definitely warm now, and her head spun a bit from the alcohol. They were giggling like kids as they played Truth or Dare. It was juvenile, but they were having a blast. Matt had just finished confessing the time he got caught masturbating in the bathroom at a party in high school. The girls collapsed against each other, their laughter ringing through the room.


“Your turn, Liz,” Matt said when they had calmed down a bit. “Truth or Dare?”


He grinned mischievously at her. Leaning close, he whispered, “Have you ever fucked another girl?”


His eyes darkened, and the laughter faded from Liz’s mouth as she gazed at his deep brown eyes. She didn’t know why, but suddenly her stomach was tightening oddly, and her heart began to beat faster.


“Would you fuck another girl?” His gaze held hers and he reached out a hand to touch her knee.


A thrill raced through Liz. He had touched her before, in much more overtly sexual ways, but it had never felt like this. What is he doing? She felt hands on her shoulders and turned her head slightly to see Jane right behind her. As she looked at her best friend, her nipples hardened, and her pussy gave a slight spasm. Before she could think about anything else, Jane’s lips were pressed against hers.


Liz didn’t know if it was the wine, or the kiss, but her head was spinning. Jane’s lips were so soft against hers, and she slid her tongue against Liz’s, stroking it slowly. Liz liked men, but something about Jane’s kiss left her gasping, and she realized that perhaps she would fuck another girl. Or maybe it’s just this girl. Jane pushed her gently to the floor and lay on top of her. She moved her lips across Liz’s jaw to her ear and Liz moaned softly when her friend gently licked the curve of her ear and sucked the lobe between her lips. She tentatively placed her arms around Jane’s shoulders, something she had done before, but now it had so much more meaning.


Liz slid a hand down Jane’s back until it cupped her ass. Jane moaned against her neck, sending shivers through Liz’s body. Jane moved one hand up to cup Liz’s breast, squeezing and rubbing her nipple through the shirt.


Matt’s voice beside her head answered. “We both do. And it would make us so happy if we could love you for the rest of our lives.”


Could she love them? Both of them? Liz looked first at Jane, then at Matt, and knew that she already did. 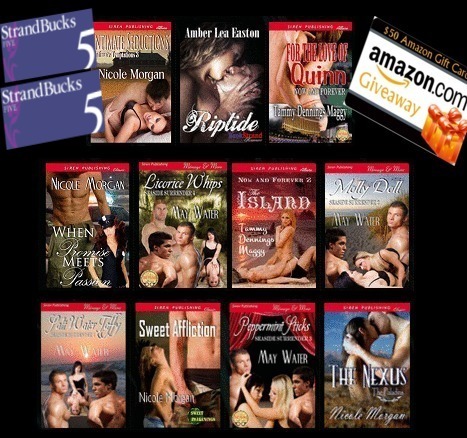