Today I'm hosting a stop for Constance Phillips's blog tour for her new book, All That's Unspoken.
Constance was generous enough to provide me with an ARC to review, but I haven't had time to finish it yet. So check out this info and then stop back to see the review next week! And don't forget to enter the draw! Constance is giving away a $40 Amazon gift card plus a copy of a book from her back list. 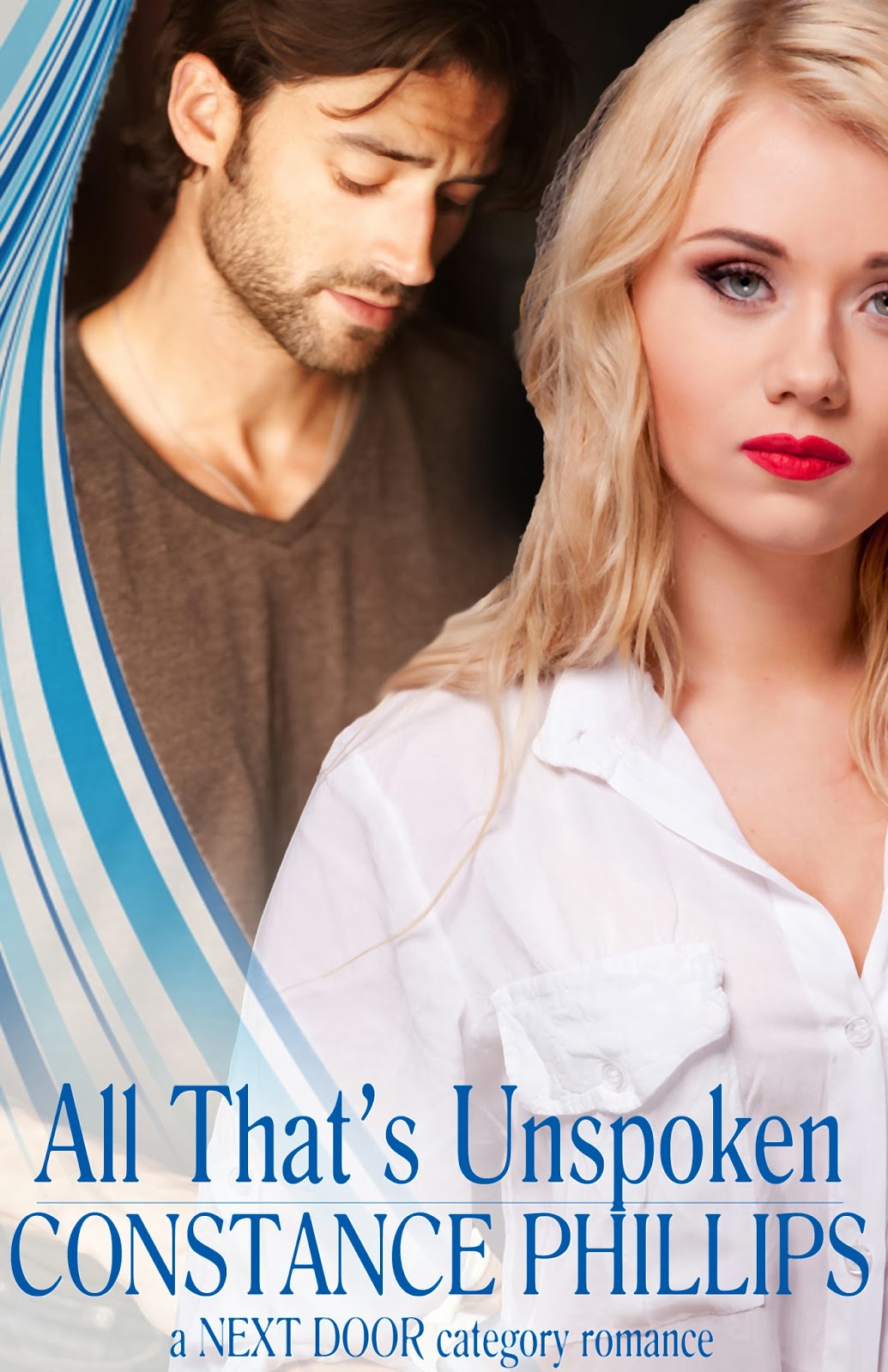 After eight years, Hailey is back in Caseville Michigan. Just months after her mother’s death, her siblings want to put their father in a nursing home and rent out the family farm. If that wasn’t enough, the prospective tenant is Nate, the high school crush she left behind the day after they acted on their mutual attraction.

After high school, Nate Jenkins planned to leave small town behind, but life dealt him a different hand of cards to play. He’s now back in Caseville, raising his daughter, and running his family’s diner. His daughter’s speech disorder has been improved by therapeutic horse riding and if he can lease the old Lambert farm, he can get her a horse of her own. The only standing in the way is Hailey, the same woman who left him eight years ago without even saying goodbye.

Can they get over all that’s unspoken between them?

Bio:
Constance Phillips lives in Ohio with her husband, daughter, and four canine kids. Her son, now on his own, is planning a wedding, reconfirming that romance still lives and breathes.

When not writing stories of finding and rediscovering love, Constance and her husband spend the hours planning a cross-country motorcycle trip for the not-so-distant future…if they can find a sidecar big enough for the pups.

Excerpt
Only when she heard the bell above the door ring out, was she able to unclench her fists and let out the breath that had tightened her chest. She’d seen Nate lingering around the edge of the counter with her plate of pancakes in hand but didn’t want him to approach her now.

She really didn’t have it in her to deal with him.

He came forward anyway, and set the plate in front of her. After a hesitation, he asked, “Can I sit for a minute?”

Her eyes fluttered closed, but she gestured to the chair. She heard it scrape against the old worn tile and could feel him just inches away from her.

“I’m sorry your dad’s health is on the decline. I’ve always really liked him. It stinks, you know.”

She took a deep breath, maybe they could talk as old friends and ignore the complications of the night they’d spent together. “I don’t think he’s that bad. Jake and Kelly are overreacting.”

He twisted his hands on his lap. “I can see how you would think that. Some days when I see him, he’s sharp as nails. Others….”

Her phone vibrated against the table. The habit to check the ID won out against the desire meet Nate’s stare. An eight-hundred number flashed, twisting Hailey’s stomach into knots. Another bill collector wanting to take the money she was trying to stretch just a little further, hoping to get through a few more weeks. She hit the button to ignore the call.

“I overheard what you said about your dad wanting the property to stay the same,” Nate said. “I’ll take real good care of the place and won’t change a thing. I love that farm the way it is.”

That brought her attention back. “What are you talking about?”

“I’ve been talking to Jake about renting the house.”

She took in his deep brown eyes and almost black hair. It was cropped short like he was trying to beat-the-heat, even if the average temperature this week was somewhere around ten degrees. Much shorter than he wore it in high school. The neatly trimmed beard and mustache were new too.

They’d both thought this small town would smother them back then.
For a fleeting moment it comforted her to picture Nate cooking in her family’s kitchen, and then she realized it wouldn’t be her house anymore. She’d be on the outside looking in. “It feels like everything is being taken away from me.”

His body stiffened as he pulled back. “It’s not like I’m stealing it. I’m going to pay you for it.”

“This isn’t about money!”

“Then what is it about?”

She reached for her purse and fumbled for her wallet with trembling hands. “Everyone seems to think that just because I don’t live here, I don’t have a voice, but you’re all wrong.” She threw a twenty-dollar bill on the table. “I didn’t leave the planet, I moved to New York. I didn’t abandon my family, but it feels like they think so. I’m sick of being treated like an outside in my hometown, in my family home, in my own life.”

She stood and tried to turn, but he grabbed her wrist. Looking back would weaken her resolve—Nate had always had that effect on her—but she did it anyway.

His daughter. The child he’d had with someone else. A lump formed in her throat as she thought of the two of them in her living room without her.
Why did it hurt so much?

It wasn’t as if he left her. She’d pursued and claimed the future she’d always wanted.

If everything she’d attained had been all she ever wanted, why was it tearing her in two to know Nate had gone on with his life without her? It wasn’t as if she’d expected he wouldn’t. She should be happy he was settled. Instead, it made her long for that place next to him even more.

A lump formed in her throat, making speech impossible. Instead, she headed for the door.

His words stopped her, and she twisted back. “I what?”

“Run. Away. When the pieces of your life don’t come together like a neat little puzzle, you scatter them all around you and stomp out of the room.”

She bristled at the venom in his voice. “That’s not what happened.”

“Oh, no. You handled it so well, just breezed out of town with no concern for those you left behind.”

They weren’t talking about her father or her house anymore. This was about how she’d reacted eight years ago, when the feelings got too real.

a Rafflecopter giveaway
Posted by Unknown at 00:00