Release Party Day 5: Against the Ropes by Sarah Castille 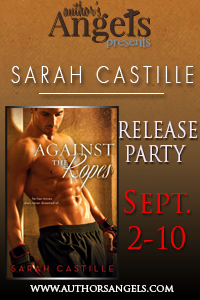 Day Five – AGAINST THE ROPES RELEASE PARTY
Sarah Castille is celebrating the release of AGAINST THE ROPES with a SEVEN day party.  SEVEN great giveaways, SEVEN different posts.  Stop by all the amazing blogs participating in the party to increase your chances to win!!! Each blog will post a special AGAINST THE ROPES post all seven days (no weekend posts)

Playlist of songs in Against the Ropes
Eye of the Tiger by Survivor
Someone I Used to Know by Gotye
I Knew You Were Trouble by Taylor Swift
Sexy and I Know it by LFMAO
Bleed it Out by Linkin’ Park
Fallin’ by Alicia Keys
Set Fire to the Rain by Adele
You Can Leave Your Hat On by Joe Cocker
My Baby Just Cares for Me by Nina Simone
Listen to Me by Buddy Holly
I’m in the Mood for Love by Frank Sinatra
Electric Boogie by Marcia Griffiths
Row, Row, Row Your Boat